AMERICA/MEXICO - After the latest massacre in Reynosa: "We cannot accept living in fear" 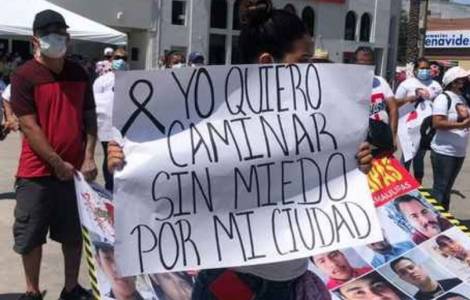 2021-11-15
100 years after the bombing, the extraordinary Jubilee Year inaugurated in the Basilica of Guadalupe

2021-11-11
"Mexico can change for the better!" learning to be "an open, synodal, Samaritan and outgoing Church"

Reynosa (Agenzia Fides) - "The people of Reynosa are hurt, shocked and terrified ... unfortunately we are used to violence, which should not be the case, since we all have the right to a safe and peaceful life": these are the words of Mgr. Eugenio Andrés Lira Rugarcía, Bishop of the diocese of Matamoros, Tamaulipas, in front of the violent death of 15 people, murdered by an armed group in the municipality of Reynosa, State of Tamaulipas, on Saturday, June 19. Although the perpetrator of this massacre is not yet known, it is known that the victims were ordinary civilians, including a taxi driver, an nursing student and a few workers. Authorities initially reported that it was a clash between drug cartels, but then it became clear that it was an action to spread terror and leave a criminal message among the people.
Tamaulipas is a state located on the border with Texas, where various groups engaged in drug trafficking and human trafficking to the United States, such as the Gulf Cartel, have been operating for some time. On Saturday, June 26, part of the population of Reynosa took to the streets giving life to a demonstration on the main streets of the city, demanding peace: "We want to live in Peace" read the signs of the demonstrators.
Although there were about a hundred people, the leaders of the civil associations who organized the march stressed that people are afraid to even leave their homes. This week there was a "voluntary curfew": no one on the street after 5pm, even shops closed at that time, a sign of fear and protection.
Mgr. Lira Rugarcía told the press that "many families have had to bury their loved ones in pain: parents, siblings, children and friends, who have been unjustly taken from them. It's horrible!" The Bishop of Matamoros celebrated a Mass for the victims of the massacre of June 19, last Thursday, June 24, but there were very few people present due to fear.
"It is an unfair that a few have to force everyone to give up leaving their homes to go to work, to go to church, to visit families. One cannot accept living in fear. It is an emotional, physical, social, spiritual and economic damage", commented the Bishop.
The Holy Father Francis, in a letter addressed to Mgr. Lira Rugarcía, signed by Cardinal Pietro Parolin, Vatican Secretary of State, sent his message condemning the violent act: "Having learned of the sad news of the bloody clash that took place in Reynosa, in which many innocent people lost their lives, the Holy Father renews his firm condemnation for this episode of unjustifiable violence". (CE) (Agenzia Fides, 28/6/2021)