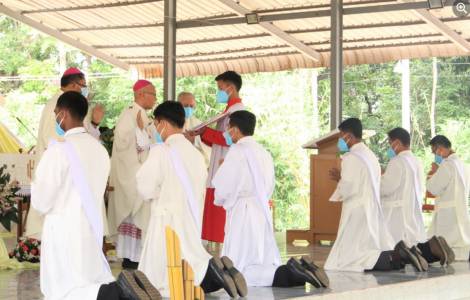 Mandalay (Agenzia Fides) - "The ordination of six new Salesian priests is a great gift and hope for the nation. The mission of each of them is to announce and live the Gospel and to be a Good Shepherd in this time of crisis", says Archbishop Marco Tin Win, Archbishop of Mandalay to Agenzia Fides, who presided over the solemn Holy Mass of ordination held yesterday, June 24 in Aniskan, Pyin Oo Lwin, in the Mandalay region.
The six newly ordained religious are of different ethnic groups (Kachin, Chin Kayah) and will carry out pastoral service in four different dioceses of Myanmar. Archbishop Tin Win underlined the important role of priests in the time of crisis and difficulty that the nation is experiencing: "They are men of God, they are generally respected, they are close to the people, they give consolation and hope. In this I fear that our churches are also subject to raids and searches by the army. The priests are courageous, but prudent. Often they help the poor, the vulnerable and the sick in hiding. For their humanitarian work of proximity to the needy they can be accused of supporting armed groups and being arrested", he notes.
"They are men who show the merciful face of the Father towards every man and who, with prayer and the gift of the Sacraments, are the link between the community and the heavenly Father. Let us pray that Myanmar will always have priests, and holy priests", he concludes.
Addressing the new priests, the Bishop said that the life of the priest is "like a bicycle race", and one must be attentive to all obstacles and be prudent, but continue pedaling on the journey towards the Kingdom of God".
The priests go to enrich the Salesian Family in Myanmar which, present in the nation in 1939, currently has communities in Mandalay, Myitkyina, Anisakan, Pyin Oo Lwin, Thibaw and Kalay Myo. The vice-province of Mary Help of Christians (MYM) has about 60 religious, 2 Bishops (Cardinal Charles Maung Bo, Archbishop of Yangon and Mgr Lucas Dau Ze Jeimphaung, Bishop of Lashio) while the Salesian Sisters Daughters of Mary Help of Christians are about 50 and there are hundreds of cooperators and lay volunteers. The Salesians respond to the needs of children, young people and their families in times of crisis, engaging above all in educational and pastoral activities. (PA-JZ) (Agenzia Fides, 25/6/2021) 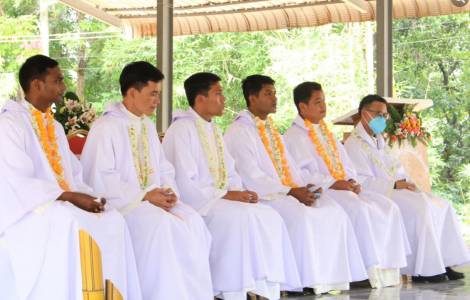 AMERICA/BRAZIL - Vocation Month begins, looking to the next Vocation Year on the theme "Vocation: grace and mission"