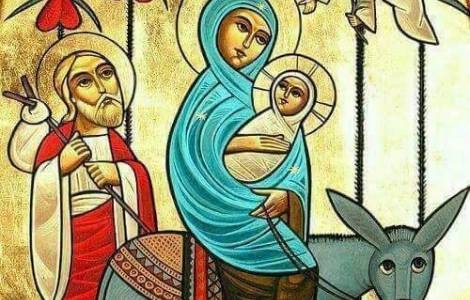 2021-10-28
Jerusalem, Israeli authorities block the cultural festival organized in the House of Abraham. The Heads of the Catholic Churches express deep concern

Nazareth (Agenzia Fides) - The Catholic Churches present in Middle Eastern Countries are preparing to celebrate the first "Day of Peace in the East" on Sunday, June 27, which this year will also be characterized by a special act of consecration of the Middle East to the Sacred Family of Nazareth. The initiative to celebrate from now on an "Annual Day of Peace for the East was promoted in principle by the Episcopal Committee 'Justice and Peace', a body linked to the Council of Catholic Patriarchs of the Middle East, in conjunction with the 130th anniversary of Rerum Novarum, the encyclical issued by Pope Leo XIII on May 15, 1891 on the 'Rights and duties of capital and work'.
As part of the first edition of the "Day of Peace for the East, a Eucharistic liturgy will be celebrated in each of the countries where the Council of Catholic Patriarchs of the Middle East exercises its action of coordination.
The Latin Patriarch of Jerusalem Pierbattista Pizzaballa will carry out the act of consecration of the Middle East to the Holy Family during the Eucharistic liturgy he will preside in Nazareth, at the Basilica of the Annunciation, starting at 10 am on Sunday, June 27.
During the concelebration, an icon of the Holy Family will be blessed, specially painted and inlaid with relics kept in the same Basilica. The icon reproduces the image of the Holy Family depicted above the altar of the church of St. Joseph, in Nazareth, where, according to tradition, the house of Mary’s groom was located. "Once blessed", explained Patriarch Pizzaballa himself in his message presenting the initiative, "the Icon will be carried on a pilgrimage, starting from Lebanon, towards the countries of the East, until its arrival in Rome towards the end of the year of Saint Joseph, on 8 December 2021. From Rome, the Icon will make its return journey to the Holy Land". Pope Francis will also impart his special apostolic blessing from Rome on Sunday, June 27 for the "Day of Peace for the East". In Iraq, Chaldean Patriarch Louis Raphael Sako will celebrate mass and will perform the act of consecration of the Middle East to the Holy Family from Baghdad, during the Eucharistic celebration which he will preside at 10 am on Sunday, July 27 in the Chaldean Cathedral of St. Joseph, in the district of Karrada. On the same date, and at the same time, each bishop of the Chaldean dioceses scattered throughout the country will join in the act of consecration during the Eucharistic liturgy in their respective cathedral.
In Lebanon, Maronite Patriarch Béchara Boutros Raï will celebrate the divine liturgy in Diman, the seat of the patriarchal summer residence. In recent days, during a press conference to present the event, Dr. George Bitar, Undersecretary General of the "Justice and Peace" Episcopal Committee of the Council of Catholic Patriarchs, underlined the novelty of the initiative, which is unprecedented in the history of the Churches of the East, confirming that on Sunday, June 27 all the Catholic Churches present in Lebanon will join in the unprecedented act of "choral" consecration. In Lebanon, this initiative is intertwined with the expectations surrounding the imminent meeting between the heads of the Lebanese Churches and ecclesial communities summoned to Rome by Pope Francis on July 1, to pray and reflect together on the many factors of crisis in the country of Cedars. In Lebanon, the Synod of Bishops of the Melkite Greek-Catholic Church, chaired by Patriarch Youssef Absi, and the Synod of Bishops of the Armenian Catholic Church, called to elect the new Patriarch, are currently underway, following the death of Bedros Ghabroyan.
In Egypt, Coptic Catholic Patriarch Ibrahim Isaac Sidrak will join the initiative of the day of peace for the East and the act of consecration of the Middle East to the Holy Family during the divine liturgy he will preside on the afternoon of Sunday, July 27 at the Sacred Heart church, in the Cairo district of Heliopolis. (GV) (Agenzia Fides, 25/6/2021)

AFRICA - Appeal of the Bishops of East Africa: "Stop violence and promote coexistence"