ASIA/MIDDLE EAST - The Pope joins the Consecration of the Middle East to the Holy Family: Middle Eastern Christians are witnesses and guardians of the faith of the Apostles 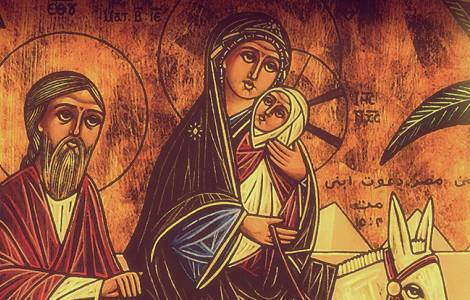 Baghdad (Agenzia Fides) - The Catholic Churches present in Middle Eastern countries are preparing unanimously to consecrate the Middle East to the Holy Family of Nazareth, and the Successor of Peter joins his brothers in faith: he renews his closeness to the pain and suffering of peoples of that region, and at the same time suggests with luminous words of hope the bond of predilection that forever unites the baptized of that part of the world to the mystery of the history of salvation.
On Sunday, June 27, with an initiative promoted with the patronage of the Council of Catholic Patriarchs of the Middle East, in the countries where this ecclesial body exercises its action of coordination, special Eucharistic liturgies will be celebrated to invoke the gift of peace in the middle Eastern area. During these celebrations, a special act will also be carried out to consecrate the entire Middle East to the Holy Family. From Rome, next Sunday, Pope Francis will also join the initiative and will impart a special Apostolic Blessing for the Peace Day for the East. Yesterday, Wednesday, June 23, the information site of the Chaldean Patriarchate released the message in Arab with which Pope Francis will join the ecclesial act wanted in order to implore the Almighty God to give peace to the whole Middle East and consecrate that area of the world to the Holy Family. A gesture that in the Pontiff's opinion also contributes to "preparing hearts" in view of the meeting of reflection and prayer for Lebanon convened in the Vatican on July 1 by Pope Francis, which will see the participation of the Heads of the various Churches and ecclesial communities present in the Land of the Cedars.

In the papal message published on the website of the Chaldean Patriarchate, the Bishop of Rome emphasizes that the Holy Family made up of Jesus, Joseph and Mary - to which the Middle Eastern Catholic Churches are preparing to consecrate the Middle East - has a mysterious link with the identity and mission proper to Middle Eastern Christians. Joseph and Mary protected and guarded the mystery of the Word of God who became flesh. Similarly, in the often painful materiality of their lives, rendered humble and helpless in the face of the political and religious powers that dominate those lands, many Middle Eastern Christians experience the gift of recognizing the fulfillment of God's promises in amazement. Mary and Joseph - notes the Pope in his message - had to flee to Egypt to guard Jesus, the Son of God, from the violence of Herod; in a mysterious way, many Christian families in the Middle East also participate today in the fate of the Holy Family, having to flee to save their children from wars, hunger and violence. They thus participate in a singular form in the Passion of Christ, and within this mystery they are also called to imagine in an equally singular way the gift of salvation revealed in Jerusalem on the morning of the Resurrection.
The Consecration of the Middle East to the Holy Family - the Pope suggests in his message - can accompany every baptized person in the countries of that region to rediscover the intimate nature of the vocation to which one who bears the name of Christ in the Middle East is called. It is not just a matter of claiming due respect for one's rights as indigenous citizens, originally from those lands: the possible adventure that Pope Francis points out is above all that of one's vocation as witnesses and custodians who draw from the apostolic sources of faith.
A predilection that does not separate and much less opposes the Christians of the Middle East from the many companions of destiny, belonging to different faith communities, with whom they share the journey in the troubled Middle Eastern historical event. In his message, as a figure of Middle Eastern coexistence, the Pope once again resorts to the image-metaphor of the carpet, woven by the skilled hands of the men and women of that region of the world: the weave that constitutes it, drawing delicate artistic forms - writes the Bishop of Rome - is made from the tangle of many different threads, which become an artistic work precisely because of their being intertwined together, with each other: and if violence, conflict and resentment tear only one of the threads, all the others suffer from it, and the whole artwork is disfigured. Faced with the explosion of bloody ferocity - the Pope acknowledges - human projects and agreements can do nothing if the power of God does not work. Only if hearts are healed by the consoling work of the Holy Spirit, as happened to the saints and to the saints that flourished within the various ecclesial traditions of the East, the fear of Christ's disciples may be won, and the light of faith received as a gift can also illuminate the path of the peoples who share the common descent of Abraham, Father of all believers. In light of these considerations, the Pope invites all Catholics to live the prophecy of human brotherhood, which he prefigured in the document signed in Abu Dhabi together with the Sunni Grand Imam Ahmed al Tayyieb and then re-proposed in the Encyclical "Fratelli Tutti" and in the Najiaf's meeting with the Grand Ayatollah Ali al Sistani. Along this path - suggests the Successor of Peter - baptized Catholics are also called in the Middle East to be "salt of the earth" also in the plots of social and political life, working to make the common good prevail, according to what the social teaching of the Church, in the time when we celebrate the 130th anniversary of the publication of Pope Leo XIII's Encyclical Rerum Novarum. At the end of his message, the Pontiff imparts the apostolic blessing to all those who will take part, also through social networks, in the liturgical celebrations scheduled for Sunday, June 27, during which the entire Middle East will be consecrated to the Holy Family of Nazareth. (GV) (Agenzia Fides, 24/6/2021)