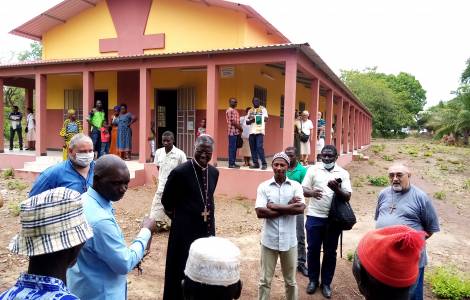 2022-02-04
The shadow of drug trafficking in the attempt to attack the top management of Bissau?

2021-12-07
In a difficult social situation, requests for baptism are growing

2021-08-20
Death of Iman Ustas Aladji Bubacar Djalo: "His commitment to dialogue will not be forgotten"

2021-06-19
After almost twenty years, the Catechetical Formation Center for families-catechists from the rural world reopens

Bissau (Agenzia Fides) - On June 15, after years of closure, the “Blessed Isidoro Bakanja” Catechetical Formation Center finally reopened its doors, with a ceremony presided over by Bishop José Lampra Cá, Apostolic Administrator of the Diocese of Bissau. Fr. Lucio Brentegani, Administrator of the diocese of Bafata, Superior of PIME in Guinea Bissau was present, as well as men and women religious, and the families who will participate in the formation during the next three years.
The Formation Center for catechist families in the rural world, called “Beato Isidoro Bakanja Catechetical Formation Center”, located near Mansoa, in the north of Guinea Bissau, about 45 km from the capital of Bissau, had been inaugurated on June 28, 1997 by His Exc. Mons. Settimio Arturo Ferrazzetta first bishop and primate of Guinea Bissau. Later in 2004 it was closed to carry out an evaluation of the path carried out.
Based on the experience lived in the first seven years, it was concluded that something needed to be changed and that the buildings needed a renovation.
Based on the experience of the first seven years, it was concluded that some things needed to be changed and that the buildings needed a renovation.
In his homily, Monsignor José Lampara Cá asked the catechist families for perseverance, inviting them to take Jesus Christ as a model of life to positively contaminate the inhabitants of your villages when you return".
The coordinator of the Center is Fr. Marco Pifferi, an Italian PIME missionary, who will have the collaboration of Sister Alessandra Bonfanti, Missionary of the Immaculate Conception, former deputy director of the Catholic station of Guinea Bissau, Radio Sol Mansi, and Mr. Paolo Imbadji.
The course will last 3 years with the participation of 6 Christian families, from the towns of the two dioceses of the country (Bissau and Bafatá).
The Catechetical Center is an interdiocesan structure at the service of the Church of Guinea Bissau whose purpose is the formation of catechist families for the rural world who can bear witness to Christian life and at the same time be rural leaders and animators in their villages, promoting development in the territory where they live.
Fr. Pifferi does not hide his joy at the reopening of the center: "it is with great joy that after a rather long pause, today the center reopens its doors to welcome a new group of families who will begin the course, the third to be held in this structure, of integral formation".
The first course was held in the period 1997-2000. The second in 2001-2004. The strong impulse and efforts of the PIME missionaries and the Missionary Sisters of the Immaculate Conception were decisive for the reopening of the center.
The idea began in 1990, in the pastoral sector OIO, in the north of the country, at that time formed by the missions of Mansoa, Bissora, Farim and Bigene. The missionaries present were mostly from PIME and the Missionaries of the Immaculate Conception. Twelve families attended the first two courses. Three years of intense formation for the whole family made families become effective evangelization agents and witnesses of Christian life in their villages. This initiative is certainly important for the life of Christian communities, especially in the most distant villages. (A.B.) (Agenzia Fides, 19/6/2021)

AMERICA/MEXICO - Meeting of indigenous and peasant catechists: synodality experienced by catechists and their communities

AFRICA/EGYPT - Patriarch Tawadros: “Exclusive priesthood for men is based on the desire of Christ”