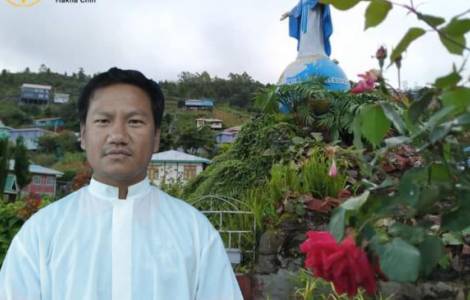 Hakha (Agenzia Fides) – Fr. Michael Aung Ling, parish priest in the Catholic church of St. Joseph in Kanpetlet, a pleasant tourist resort in the diocese of Hakha, in the Burmese state of Chin, on the border with India, was arrested today, June 16, by the military of the Burmese army and is still in custody. As a source from the local Church has confirmed to Agenzia Fides, "there is great concern about his fate and everyone is asking for his immediate release". As a catechist from the parish explains to Fides, the military took him away this morning after breaking into his parish residence, accusing him of supporting the Chinland Defense Forces (CDF), part of the popular resistance forces that emerged throughout Myanmar to oppose the coup on February 1. According to the military, the priest offered refuge to young resistance fighters in his parish church. The army has also seized all the bags of rice and food stored for the students who normally use the premises of the parish, where they study in boarding schools. "The episode is yet another act of violence and cruelty against people or structures of the local Church", says a local nun. In Kanpetlet, a small town with 2000 inhabitants, in a hilly area, violence has come to disrupt one of the most famous tourist areas. The Catholic Church of St. Joseph stands at the foot of the historic Victoria mountain ("Khonuthong" in the local language), a place of extraordinary natural beauty, included in the lists of cultural and natural heritage sites by the Association of Southeast Asian Nations (ASEAN). In the State of Chin, in eastern Myanmar, on the border with India, clashes between the Burmese army and local resistance fighters have intensified in the Kanpetlet area in the south of the State. Fighting has been going on for a few days and the approximately 2,000 residents of the town have been forced to flee their homes. "When people leave their homes, the regime forces loot properties and empty houses", After people leave their homes, local residents report.
Resistance fighters, equipped with homemade weapons such as shotguns and homemade explosives, use guerilla tactics to fight the regime's forces, with ambushes and assaults on small convoys. Tatmadaw troops (the Burmese army) use heavy weapons such as automatic rifles and rocket launchers against local fighters. In this critical phase, the Catholic Church in the diocese of Hakha is providing shelter and food to the displaced, including women, the elderly and children, who have fled their homes due to the intense fighting. The military patrol the territories and search houses and religious structures where young people could take refuge, without avoiding committing acts of violence against civilians.
In the diocese of Hakha, out of a population of more than 700 thousand inhabitants, mostly of Chin ethnicity, there are about 35,000 Catholics, but about 40% of the entire population is Protestant Christian (PA-JZ) (Agenzia Fides, 16/6/2021)

AFRICA/NIGERIA - Father Felix Zakari Fidson, kidnapped at the end of March, has been freed