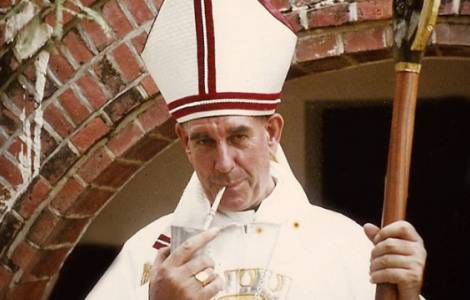 2021-11-30
Respect for indigenous peoples, agrarian reform, promotion of the common good: open letter from the Bishops to the authorities

2021-11-23
Year of the Laity: promoting formation, communion and the missionary spirit of the laity

2021-11-09
The Bishops: "We must give priority to evangelization and also necessary to evangelize the field of politics and politicians"

Asuncion (Agenzia Fides) - In the church of the Paraguayan Chaco and in thirty other places in the country, a Novena is being held to call for the end of the pandemic, as requested by Pope Francis, and for the beatification of Mgr. Pedro Shaw, Apostolic Vicar of Pilcomayo. The novena began on Saturday, June 12, and will end on Monday, June 20, the eve of the Bishop's death, which occurred on June 21, 1984 following an accident. While he was heading to Asunción, driving a mission Land Rover together with two nuns, in order to talk with a technician about the feasibility of installing a station in the Chaco, Bishop Shaw noticed a malfunction in his car . He stopped at kilometer 28 of the Trans-Chaco Route, got out of the car and began to repair it. At the same time, a truck with a trailer came at high speed, hitting the car and the bishop, killing him instantly. At the scene of the accident there is a chapel dedicated to "Pa'i Puku", a popular nickname in the Guarani language that means "tall father" by which Monsignor Shaw was affectionately called and which still remains today, where the faithful approach to revitalize spiritual life or request protection for their relatives. On Monday, June 21, the Bishop of the diocese of Benjamín Aceval, Mgr. Amancio Benítez Candia, together with the clergy and representatives of the Congregation of the Oblates of Mary Immaculate (OMI) to which Mgr. Shaw belonged, will celebrate a solemn mass in memory of the great missionary of Chaco. Pedro Shaw was born on September 6, 1925 in Wilrijk, diocese of Mechelen-Brussels, Belgium and was ordained a priest on September 30, 1951. The following year he entered the Apostolic Vicariate of Pilcomayo. He arrived in Paraguay on December 16, 1952. Since 1953 he worked as a tireless itinerant missionary in Chaco, in Benjamín Aceval, María Medianera, Puerto Elsa (today Nanawa). On April 22, 1981 he was consecrated Bishop of the Apostolic Vicariate of Pilcomayo. On June 21, 1984 he was assassinated. As the note from the Episcopal Conference of Paraguay recalls, Bishop Pedro Shaw, the popular Pai Puku, was a tireless missionary, he rode on horseback, on carts and even on foot, crossing arid deserts and through extensive marshes, crossing rivers and streams, swamps infested with all kinds of insects and parasites. He knew no time, no hour, no border, and no limits to his physical constitution. The idea of initiating the cause of his beatification spread shortly after his death, and matured in 2000. In 2019, the Bishop of Benjamin Aceval, Monsignor Amancio Benítez, made the decision to officially open the beatification process, but this could not take place due to the pandemic. (SL) (Agenzia Fides, 15/6/2021)

AMERICA/URUGUAY - After the interruption due to the pandemic, thousands of pilgrims return to the Shrine of the "Our Lady of the Thirty-Three"