AMERICA/BOLIVIA - The tragedy of the lack of oxygen for Covid patients; Mgr. Gualberti: "in the name of God, let's save lives!" 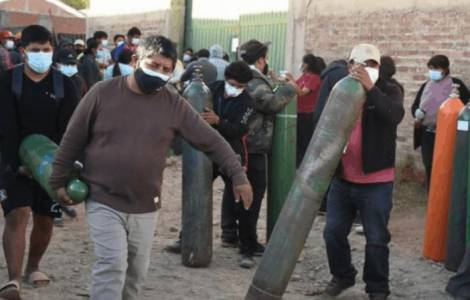 2021-10-23
Giving one's life so as not to abandon the elderly: the missionary witness of the religious who died of Covid

Santa Cruz (Agenzia Fides) - The desperation to obtain oxygen for patients with coronavirus (Covid-19) is growing among Bolivian families, who in recent hours have been forced to queue up to refill their cylinders in the hope of saving their loved ones. The situation is very critical in the departments of Cochabamba and Santa Cruz, where people, with tears in their eyes, are asking for help to prevent the death of their loved ones. Concern increases after learning that yesterday Monday, May 31, at least eight people lost their lives due to lack of oxygen at the National Health Fund (SNC). The latter denies this shortage and the fact that people have died for it.
During a press conference held on Saturday morning, May 29, the Archbishop of Santa Cruz, Mgr. Sergio Gualberti, expressed his concern at the interruption of the oxygen supply to the "Hospital Catolico" and underlined that everything had to be done to save the lives of patients admitted to the Covid-19 hospital. On Friday, May 28, the company that supplies oxygen to the Hospital Catolico, sent a letter informing it that from the following day of the 750 kilograms of oxygen that it supplied daily to the Catholic hospital of Santa Cruz de la Sierra, it would only deliver 250 kilograms.
During a press conference on Saturday 29, the Archbishop of Santa Cruz, Mgr. Sergio Gualberti, and Engineer Víctor Valda Antelo, director of the Hospital Catolico, expressed their dissent and their concern for the serious consequences that could cause lack of oxygen in the hospital. Leonardo Sevilla Grizafis, Administrator of the hospital, was also present at the press conference. The hospital director sent a letter to the company providing the oxygen asking them to reconsider the decision to cut the supply, as 33 patients are in critical condition and urgently need oxygen.
In the note sent to Fides, Mgr. Sergio Gualberti informs that he personally asked the company that supplies oxygen: "in the name of God, let's save lives!". Lack of oxygen can in fact cause the death of many of these brothers. He also called for every effort to be made to provide the oxygen needed to save lives. He then called on the authorities to more strictly control the sale of drugs on the black market, which leads to overpriced drugs, to which the poorest people do not have access.
The situation is very serious in Santa Cruz, where even the secondary hospital in this area, that of Yapacaní, has ordered the closure of the intensive care unit due to lack of oxygen. In an interview with Radio La Razón, Deputy Minister of Consumer Defense Jorge Silva said the third wave of ovid-19 has increased the demand for medicinal oxygen by 300% in Cochabamba and Santa Cruz, two of the departments most affected by the pandemic. He explained that the country has 12 oxygen generation plants, which have increased their production by 40% in the first wave, by 100% of their capacity in this third wave, to cover the needs, although excessive demand persists which prevents normal supply.
Bolivia imports medicinal oxygen from Paraguay, Brazil and Argentina, which have closed their export borders, and recently asked Chile for supplies. "This is therefore a problem that is felt in several countries around the world, where the demand for oxygen has been exceeded by the contagion and by this unpleasant situation that has been created because companies have already reached the limit of their production capacity", said Silva. Bolivia, which had resisted the first wave of the pandemic well, now has 371,000 cases and nearly 15,000 deaths from Covid-19. (CE) (Agenzia Fides, 1/6/2021)