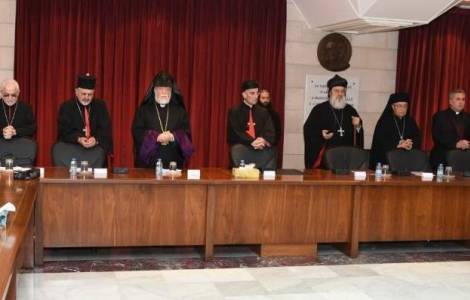 2021-09-29
Patriarch emeritus Michel Sabbah: "The future of Christians in the Middle East is not a question of numbers, but of faith"

2021-09-28
Document on the future of Christians in the Middle East: Western "protections" or "alliances between minorities" do not help us

Beirut (Agenzia Fides) - The few words with which, on Sunday May 30, after the prayer of the Angelus, Pope Francis announced, from the window of the Apostolic Palace overlooking St. Peter's Square, that he will meet on July 1 at the Vatican "the principal leaders of the Christian communities present in Lebanon, for a day of reflection on the worrying situation of the country and to pray together for the gift of peace and stability "arouse in Lebanon surprises, hopes, expectations and questions. The Pope entrusted the intention inspiring the convocation of this meeting "to the intercession of the Mother God, so venerated at the shrine of Harissa", and asked all to accompany the preparation of this event by solidarity prayer, invoking for this beloved country a more serene future".
The Pope's initiative takes shape while Lebanon has long been sucked into a systemic crisis that seems to undermine the very existence of the Lebanese national structure.
According to local sources contacted by Agenzia Fides, the Pope's announcement also raises questions and reflections in the various ecclesial groups aimed at better specifying the scope and criteria of the next summit convened by the Pope.
First of all, in Lebanon, we wonder who and how many will be the "main leaders of the Christian communities present in Lebanon" and expected by the Pope in the Vatican on July 1st. The Lebanese media take for granted the presence at the meeting of the Maronite Patriarch Béchara Boutros Raï, the Syrian Catholic Patriarch Ignatius Youssif III Younan, the Syrian Orthodox Patriarch Mor Ignatius Aphrem II and the Catholic Patriarch of Cilicia of the Apostolic Greek Armenians Aram I and the Greek Apostolic Patriarch Aram I. Melkite Catholic Youssef Absi. Even Patriarch of Antioch of Greek Orthodox Yohann X Yazigi, or his representative, could attend the meeting, as well as Reverend Joseph Kassab, Chairman of the Supreme Council of Evangelical Communities in Lebanon and Syria. The possibility of seeing Christian political leaders, scattered in parties on opposing fronts, appears excluded. Furthermore, it remains to be seen whether the meeting will provide an opportunity to share general considerations on the current situation of the country and of the Lebanese Christian communities, or whether the attention of the summit will focus on specific points.
Indirect repercussions on the contents of the meeting convened in the Vatican could also come from possible developments in the political situation in the Land of the Cedars, where the paralysis that prevents the Prime Minister in charge, the Sunni Saad Hariri, from forming a new government since last October, could be unblocked. Finally, the meeting could be the occasion to clarify the wish already expressed by Pope Francis to make an apostolic visit to Lebanon. (GV) (Agenzia Fides, 31/5/2021)