ASIA/INDIA - Indian Church remembers the sacrifice of priests and nuns who died from Covid-19, in the work of assistance and care 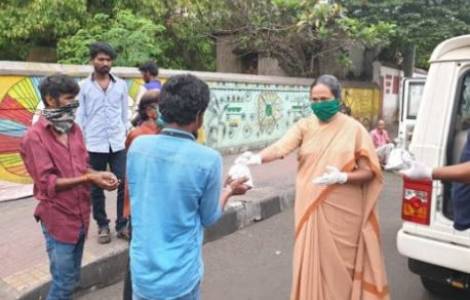 2021-10-04
Resignation and appointment of metropolitan Archbishop of Bhopal

New Delhi (Agenzi Fides) - The Catholic Church in India remembers the missionary commitment, the gift of oneself, the supreme sacrifice of priests and nuns who died of Covid-19 because they did not hesitate to perform their pastoral and social service in total dedication to the sick and the suffering. On May 30, 204 priests, 212 nuns and 3 bishops died. Suresh Mathew, Capuchin friar and Indian journalist, editor-in-chief of the English-language magazine "Indian Currents" was responsible for monitoring the situation at the national level and establishing the list of priests, nuns and bishops who died due to Covid-19. "Most of the priests and nuns who died were in rural areas to carry out the pastoral work and did not have access to timely health services", explains Father Mathew to Agenzia Fides.
India has about 30,000 Catholic priests, both diocesan and religious. The nuns, on the other hand, are about 103,000. Among the deceased religious of many male and female congregations, the Jesuits who are engaged in the service of human promotion among the poor, the indigenous, the tribal, the outcast, registered 36 victims and the Missionaries of Charity, who take care of the abandoned and the dying, lost 14 nuns.
Many of them died while actively engaged in their ministry: "The sisters were infected while on duty in the hospital. Some priests performed funeral rites or administered the sacraments and gave spiritual assistance to the sick. And, once infected, many of our priests working in remote parts of the country did not have access to adequate hospital care. Perhaps, if they had been in cities with better health infrastructures, they would not have lost their lives", said the Capuchin friar. "They worked among the poor, the indigenous, the forgotten who did not have access or could not afford specialized care and hospitals. They remained by their side in difficulty, scarcity and destitution", he added.
"They were people who, consciously, did not want to shut themselves up or isolate themselves, but wanted to continue their work, giving themselves, to bear witness to the merciful and compassionate face of God who looks at the suffering, even at the risk of their lives", he concludes.
"We are all saddened by the death of so many nuns, brothers, priests and missionaries. We feel a lot of pain because we knew many of them", confirms to Fides Fr. Anand Mathew, a member of the Indian Missionary Society, a congregation that lost three priests "At the same time, we recognize and remember the death of many lay Christians and many young missionaries, as well as the sacrifice of people of various faiths, during the second wave of Covid", said Fr. Ananad Mathew, social worker and communications expert.
Archbishop John Barwa, at the head of the community of the Archdiocese of Cuttack-Bhubaneswar, in Orissa, in eastern India, reports to Fides that his diocese has lost two priests due to Covid: "The priests were pioneers in the most remote missions in the Kingdom of God. The loss of such zealous missionaries is a great loss for the Church, for society and for the country".
"India is going through an unprecedented second wave of Covid as there is a growing gap between vaccine supply and need, lack of hospital beds, medicine and oxygen. There is serious concern for everyone. In addition, the loss of so many priests and nuns in these days is even more painful", said to Fides Kailash Chandra Dandapat, social worker in Orissa, who knew some of the priests who died of Covid-19 (such as Fr. Bijaya Kumar Nayak), tireless animators of the communities, who provided care, assistance and consolation until the end. "They died while carrying out their pastoral service and their mission. Their contribution to the Church and her mission will be remembered forever", notes Father Dibyasingh Parichha, priest and lawyer in Orissa. "We thank God for the gift of these people and, following their example, we promise to continue dedicating our lives to God, the Church and God's people, in love and service, especially during the period of the pandemic", concludes Fr. Parichha. (SD-PA) (Agenzia Fides, 31/5/2021)