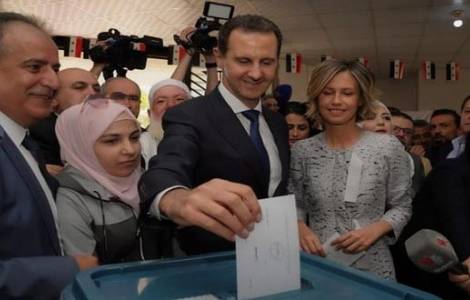 Aleppo (Agenzia Fides) - While the European Union has extended the economic sanctions against Syria by one year, Western politicians and the media have described the presidential election on Wednesday, May 26th, from which Bashar al Assad emerged victorious, as a "farce". According to the Maronite Archbishop of Aleppo, Joseph Tobji, "the main problem for the Syrian people is their own survival from hunger, which is also caused by sanctions". He considers the international strategy of imposing economic sanctions to weaken Syrian power to be complete ruthless. "Anyone who imposes such sanctions," said the Maronite Archbishop in an interview with Fides, "lives outside Syria. The logic of the sanctions is arguably to starve the people and reduce the political consensus for the authorities and thereby overthrow the government. But as a Pastor, I see that people suffer from poverty and it doesn't seem to me that discussions about democracy are a priority for them".
As expected, the election on Wednesday, May 26th, sealed the extension of Bashar al Assad's term of office as president: he received 95.1% of the votes cast. The two challengers obtained 1.5% and 3.3%.
According to an official statement by the Speaker of Parliament, more than 14 million of the 18 million Syrian citizens on the electoral roll took part in the election. These figures could not be verified by any independent body. In the previous 2014 elections, held amid the conflict, Assad received 88% of the vote.
As early as 2015, resolution 2254 of the UN Security Council stipulated that elections in Syria would have to take place under the control of the international community after negotiations between the government and the opposition, in order to ensure participation by the many millions of Syrian citizens living abroad. The government led by Assad has nevertheless decided to call the elections anyway, since the negotiations with the opposition groups desired by the international bodies have stalled and one could hardly wait for their conclusion to set the election date. Meanwhile, the election result is presented by the official organs of the government in Damascus as a further legitimation of Assad in his role as the only political actor able to ensure the reconstruction of the war-ravaged country, while politicians and institutions of Western countries describe the election as untrustworthy and unlawful.
Archbishop Joseph Tobji reports from Aleppo that he did not have the impression of a general abstention from the Syrian population: "We saw so many people in front of the polling stations and celebrations in the streets and squares that were not only attended by citizens close to the government. Certainly some of the potential voters did not go to vote, but the increase in the number of abstentions seems to me a global phenomenon that is increasing in many countries with different political models".
Speaking to Fides, the Archbishop emphasized that not all Syrians suffer equally and that the devastating economic crisis is accompanied by an impressive increase in corruption, which is draining valuable resources from the community: "It is a problem that is rooted in our history", said Tobji, "and because of the war, corruption has increased. The sanctions also contribute to this phenomenon in their own way. Those with money and positions of influence take advantage of it. It's like a vicious circle: corruption feeds poverty and poverty feeds corruption which takes away the few remaining resources. Laws are being passed to curb corruption, but this is a problem that cannot be resolved in a short period of time".
The Maronite Archbishop hopes that after the elections there will be positive developments in dealing with national crises. He describes the low spread of Covid-19 infections in the Syrian population as "miraculous", also given the reduced spread of elementary medical aids, such as masks". For the past year and a half, the border closure due to the pandemic has also blocked the emigration of Syrian Christians to other countries. A phenomenon, regrets Archbishop Tobji, "which in the years that were marked by the worst phases of the conflict also hit Christian communities in Syria hard and caused their number to dwindle by two thirds". (GV) (Agenzia Fides, 28/5/2021)