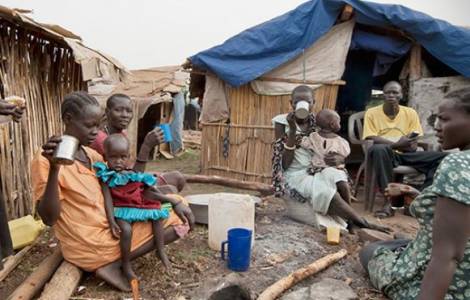 2021-04-10
Covid-19 infections increase in particular among young people: the authorities appeal to a sense of responsibility

Khartoum (Agenzia Fides) - "Anger and frustration, as well as poverty, circulate in Sudanese society. The fear is that in this impasse a strong man will break through, as so many times in the history of the country", a missionary serving in Sudan, who asks for anonymity for security reasons, tells Fides. Two years ago, Sudan experienced its "Spring", a bloodless revolution that led to the overthrow of the dictator al Bashir and the beginning of a transition path towards democracy. Two years after that historic change, there is a worrying economic recession and a precarious social situation. The missionary notes: "Since the fall of Bashir we have entered a period of great contradictions, there has been progress but the feeling that prevails among the people is that of disappointment. The main problem is clearly economic: inflation has well exceeded 500%. Under Bashir everything was state-run and governed through the subsidy system, a typical Muslim Brotherhood model, which guaranteed bread, energy and medicine, as well as strong control. Since the subsidies were canceled, the expenses families face have increased tenfold. Bread, for example, has gone from one lira a loaf in December 2018, up to 15 20 lire today. People are exhausted. On a political level, almost two years after the agreement for the transitional government (signed in August 2019, it envisaged an executive made up of 50% military and 50% civilians, ed), there is still no Legislative Assembly, the body that should have represented the whole of society, political, civil and religious movements".
This absence has implications for people's lives: "It means that Islamic law is still in force: women are considered much less than men: in court, for example, a man's word is worth that of two women, women cannot travel alone. Furthermore, the legislation on divorce is entirely in favor of men".
The missionary also points out the issue concerning freedom of worship: "The Churches are still under the jurisdiction of the Ministry of Religious Affairs which essentially proposes a repetition of the ministry's approach in the previous regime. Some time ago, the minister proposed a regulation according to which the dicastery would have the faculty to appoint or remove Bishops. Naturally, the Churches did not accept and that regulation was frozen, but the tendency is to control everything and use all the instruments available to do so, such as the bureaucracy". On the political scene "there is a continuous tension between the military and the civilian soul, while people are waiting for a real change that takes time to arrive". Fides source concludes: "There is hope that the transition towards a complete form of democracy and respect for rights will not be lost. A positive sign comes from the end of the embargo: with the price of the dollar settled and unified, investments have grown. Everyone hopes that this will restart the economy and give encouragement to the country". (LA) (Agenzia Fides, 22/5/2021)