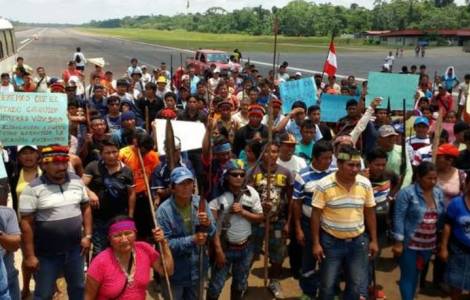 Loreto (Agenzia Fides) - A new oil spill has been reported in the Corrientes river, near the district of Trompeteros, in the province of Loreto, in the Peruvian Amazon. The leak originated from the plant managed by PlusPetrol Norte. "Since May 10, oil has been in the river, so we are asking for help", said reporter Edson Hualinga of the “La Voz de la Selva” radio station.
Hualinga added that the event occurred early in the morning and affected about 16 communities in the area, including San Cristobal, Union and Palmeras. The deputy-prefect of Villa Trompeteros, Robert Torres, who was informed of the incident, said he would contact the government authorities so that responsibilities in this case are not avoided. However, the causes remain unknown. Tedy García, leader of the Achuar ethnic group from Trompeteros, expressed his outrage at the continuous spills that occur in the area because, despite the evidence they present to the State, they are ignored. After the complaint, the Minister of the Environment, Gabriel Quijandría reported through Twitter that a team from the Environmental Assessment and Inspection Agency (OEFA) traveled to Iquitos, heading to the affected area to assess the situation. According to Fides sources, these cases are not reported in the press. At the end of April, there was another spill in Trumpeteros, this time affecting the community of Nueva Esperanza. Despite protests from the population, Pluspetrol informed them that it did not accept responsibility for the damage caused. According to information from the OEFA (Agency for Environmental Assessment and Enforcement), since 2000 there have been more than 180 oil spills in block 8, which is operated by PlusPetrol. Currently, the mining company is in the process of being liquidated to avoid taking over 1,199 damaged sites in block 192 alone. In addition, according to a report prepared in collaboration between the National Human Rights Commission and Oxfam (Oxford Committee for the Relief of the Famine), the mining company is responsible for the damage caused in 2,000 places. The news sent to Agenzia Fides by the Socio-ecclesial Observatory highlights the situation of impotence of indigenous populations in the face of these international oil companies that are not responsible for the damage caused to the communities and the environment, a fundamental habitat for these populations. The words of Pope Francis pronounced precisely in Peru, on January 19, 2018, are very current: "The native Amazonian peoples have probably never been so threatened on their own lands as they are at present. Amazonia is being disputed on various fronts. On the one hand, there is neo-extractivism and the pressure being exerted by great business interests that want to lay hands on its petroleum, gas, wood, gold and forms of agro-industrial monocultivation. On the other hand, its lands are being threatened by the distortion of certain policies aimed at the “conservation” of nature without taking into account the men and women, specifically you, my Amazonian brothers and sisters, who inhabit it". (CE) (Agenzia Fides, 20/5/2021)