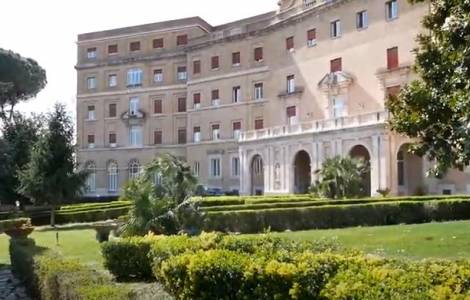 Vatican City (Agenzia Fides) - "The work we do at the Urban College de Propaganda Fide is to form the future priests of the young churches. It is a task, indeed I would say an art, which is not at all easy as it involves forming not only the intellectual or academic part but, more importantly, the human and spiritual part of a future priest. This integral formation is particularly important to us": This is what Mgr. Vincenzo Viva, Rector of the Urban College De Propaganda Fide says in an interview with Agenzia Fides, whose institute is situated on the Janiculum Hill in Rome. The College hosts 132 seminarians from Asia, Africa and Oceania. "The figure of the priest - observes the Rector - also in the young Churches is undergoing profound transformation. When our students, after years of study and formation, return to their local Churches, it is the moment of 'birth to pastoral life', for which they have prepared themselves in the time spent here in the College. For us formators it is a great satisfaction to know that, once they return to their dioceses, the work of formation bears fruit. The Bishops tell us of the very positive contribution even in very difficult situations, in countries where there is civil war or there are situations of great poverty or violence, in territories where you have to travel many kilometers to reach communities".
Mgr. Viva recounts an experience: "A seminarian from the College, who came from the Church of Pakistan, where Christians are a small minority and where it is not easy to express faith, told us a significant and paradigmatic episode. Back in his diocese, he created a living nativity scene which was an absolute novelty for that country. In this living nativity scene he involved not only Christians but also Muslims who contributed to represent different scenes of the Gospel story. This living Gospel event involved more than 20,000 pilgrims. It was a moment of communion, coexistence and harmony for the local people. The idea was born because the seminarian had seen the reality of the living nativity scene in an Italian parish, often organized in Italian cities and churches. And it has borne fruits of peace in Pakistan". "This experience - concludes the Rector - has become a laboratory of catechesis, it has been an opportunity for dialogue between religious communities. For us as formators, seeing how our former student worked hard to carry out this project was a source of satisfaction and hope". The Pontifical Urban College "de Propaganda Fide" is the Major Seminary of the Congregation for the Evangelization of Peoples, established in Rome by Pope Urban VIII with the Bull "Immortalis Dei Filius" of 1 August 1627. Faithful to the intuitions of the origins and fully in tune with the teachings of the Second Vatican Council, the centuries-old formative experience of the Pontifical Urban College recognizes the inestimable value of a well-formed native clergy. Indeed, the work of evangelization takes deeper roots when "the various faithful communities all have, from among their members, their own ministers of salvation in the order of bishops, priests, and deacons, serving their own brethren" (Ad Gentes, n. 16). For this reason the College has always offered training to seminarians chosen from mission territories and young Churches, so that they prepare to become Pastors capable of creating a new chapter of evangelization "full of fervour, joy, generosity, courage, boundless love and attraction!" (Francis, Evangelii Gaudium, n.261).
Since its beginnings, the Urban College has been spiritually and juridically linked with the Missionary Dicastery of the Holy See. Originally the College occupied the premises of the Palazzo in Piazza di Spagna, where today the offices of the Congregation for the Evangelization of Peoples are located. In 1925 the Cardinal Prefect W.M. van Rossum (1854-1932) bought the hospital of S. Maria della Pietà on the Janiculum, transferring the students there on November 2, 1926. In the meantime, construction of the school began, which later became the Pontifical Urbaniana University and the new college for seminarians, inaugurated personally by Pope Pius XI on April 24, 1931. All the students of the Urban College enjoy a full scholarship with board, lodging and academic fees, granted by the Congregation for the Evangelization of Peoples. (MI) (Agenzia Fides, 15/5/2021)

ASIA/CHINA - From Mariology to the Fathers of the Church: 20 years of "academic evangelization" of the Beijing Institute for the Study of Christian Culture

VATICAN - Multiculturality and formation: the International Congress of Urbaniana University

EUROPE/ITALY - Italian missionaries, people who proclaim Christ with their lives to the whole world