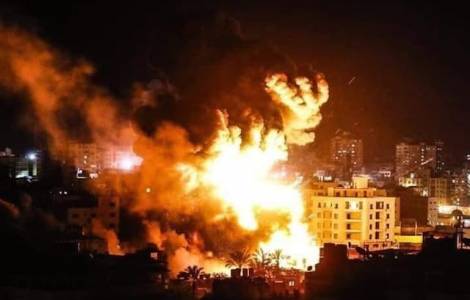 Jerusalem (Agenzia Fides) - The massive Israeli air force raids on the Gaza Strip have also hit the homes of Christian families located near the Catholic parish of the Holy Family, also causing damage to the convent and the nursery school of the Sisters of the Rosary. Bishop Giacinto-Boulos Marcuzzo, Patriarchal Vicar of the Latin Patriarchate of Jerusalem for Palestine and the Holy City, confirms this to Agenzia Fides.
"The Israeli raids take place after the launching of missiles by Hamas on the territory of Israel, but according to what we see, the considerations of those who, in the United States, described the military reaction of the Jewish state as 'proportionate' are completely unfounded. They bomb from afar. A bomb fell near the convent. Among the more than 100 victims are women and children. Once again, the famous 'smart bombs' harm everyone, without being able to distinguish between military targets and the civilian population".
While the propaganda campaigns invade the global media network, Bishop Marcuzzo - born in Italy but became a priest in Palestine, after studying at the patriarchal seminary of Beit Jala - clearly invites us not to lose sight of the chain of events and provocations that has unleashed the new violence in the Holy Land, if we really want to find ways to stop violence and innocent bloodshed. "At the bottom of everything", the Patriarchal Vicar recalls "there is the Israeli-Palestinian conflict that has lasted for decades, and above all the Israeli occupation of the Palestinian Territories. Until the causes that are at the root of the conflict are addressed and resolved, it will only take a spark for everything to explode again. We have already seen this with the first and second Intifada". The current unleashing of violence - Bishop Marcuzzo remarks - is due to the accumulation of a series of "unfortunate circumstances" that have rekindled the tension around Jerusalem, the real knot of the conflict: the expropriation of Palestinian homes in the Jerusalem neighborhood of Sheikh Jarrah, then the impediments imposed by the Israeli on the Muslim faithful who wanted to reach the Al Aqsa Mosque on the last Friday of Ramadan, when Muslims celebrate the "Night of Destiny" (Laylat al Qadr), in which the Angel Gabriel revealed the Koran to the Prophet Mohammad. Then came "Jerusalem Day", with the usual "March of the Flags" - this year celebrated outside its usual route - with which Israeli nationalists and extremists annually cross the Arab neighborhoods of the Old City to reaffirm Israeli domination over the entire Holy City. And we must not forget adds Patriarchal Vicar Marcuzzo - the Israeli refusal to hold the Palestinian political elections in East Jerusalem, which were to take place on 22 May and for this reason have been postponed. And then, we must also take into account as a cause of the current situation the very unhappy plan of US President Donald Trump, who by recognizing Jerusalem as the undivided capital of Israel has fueled resentment in the Arab populations. However, another factor of serious concern is the clashes that have already occurred in Israeli territory between Arabs and Jews. "In the so-called 'mixed cities', such as Haifa, Ramla, Jaffa or Lod", Bishop Marcuzzo remarks, "coexistence was quite peaceful. Now we have news of assaults, attacks on houses, clashes in the street between members of the two communities. And we also have several confirmations that the security forces do not always intervene impartially". Faced with the violence that returns to tear the heart of Jerusalem and the Holy Land "We, as local Churches, always try to work for peace", concludes Bishop Giacinto-Boulos Marcuzzo. In the land of Jesus, once again, "a miracle is needed", as he wrote on the patriarchal website Sami el Yousef, Chief Executive Officer of the Latin Patriarchate of Jerusalem. (GV) (Agenzia Fides, 14/5/2021)