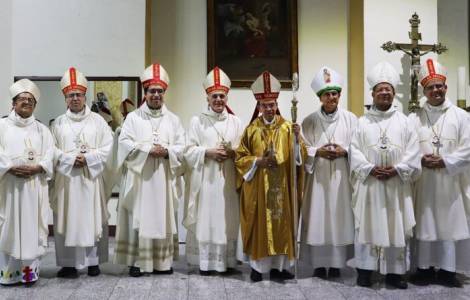 2022-06-07
The Bishops in solidarity with the Church of Nicaragua, "concerned about the social and political situation"

San Salvador (Agenzia Fides) - After the dismissal of the Magistrates of the Constitutional Chamber of the Supreme Court of Justice and the Attorney General of the Republic, which occurred on May 1st, the Bishops' Conference of El Salvado expressed its disapproval of such measures as "the procedure provided for by law was not followed".
In a statement entitled "Let's build an authentic democracy together", sent to Agenzia Fides, the Bishops say: "we have followed the events with great concern, accompanying the people and ensuring their legitimate interests". Recalling the principles of the Gospel and the Social Doctrine of the Church, and in particular the teachings of St. Oscar Arnulfo Romero in similar circumstances, they recall that the first duty of Pastors, accompanying the people of God, is to pray to God "so that his Spirit may enlighten our steps"; therefore "recognize the positive aspects that can favor the authentic well-being of the people" and "maintain the freedom to judge the decisions and actions of the rulers, always seeking the good of the country, expressing our points of view with honesty and clarity as a service to peace and harmony". The Bishops therefore launch "a vehement appeal": "Social peace in nations requires the efforts of citizens, but, above all, of the rulers from a correct exercise of the laws that govern the nation". They urge the main actors on the political scene to act wisely, "a necessary virtue in this situation that the country is going through", in order to lead the entire nation towards a truly democratic state, as the Salvadoran people have always wanted and demanded. In other words, "a state that protects the fundamental rights of the human being, allowing them to live in an environment of peace, justice, freedom, order and respect". The crimes of the past should be judged following due process and should not go unpunished, but the past, near and far, should not become a source of resentment, the bishops admonish. "The past must be, above all, a mirror where the present is reflected so as not to make the same mistakes. Let us remember that the past is not a freezer of resentments but the source that inspires the transformation of the present to push the nation towards a better future". Then they underline that "forgiving is not synonymous with approving injustices; but, demanding justice is not synonymous with claiming revenge". The Episcopal Conference launches a call for "a healthy legislative exercise that promotes a social and institutional environment permeated with harmony and equity, that favors dialogue, promotes the independence of the three powers, and the rule of law". He urges deputies, mayors and city councils who have just taken office, "to work with enthusiasm and generosity for a new El Salvador, free from violence, impunity and corruption".
Finally he believes that "our beloved country demands a change of course, not along paths of violence - well known to the population - but through paths of dialogue, understanding, solidarity, fraternity, equality, freedom, order, justice and peace". (SL) (Agenzia Fides, 6/5/2021)