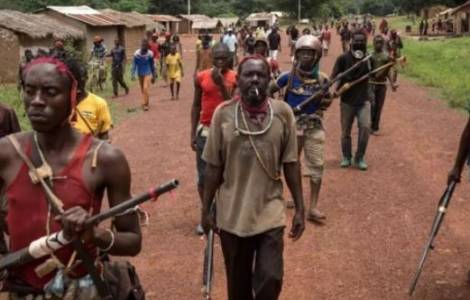 Bangui (Agenzia Fides) - "A change is underway in the Central African Republic. The armed rebels who had entered the cities have left them and are in the forests. It remains to be seen whether this is real or just temporary peace. Now it is important that there is a awareness among people. It is crucial to create a sense of peace in people in order to disarm hearts. Not only the rebels, but society as a whole must find a balance and pave the way to peace". Cardinal Nzapalainga, Archbishop of Bangui, speaking to Agenzia Fides sees a glimmer of hope in the future of his troubled Country, despite months of resurgence of the conflict and the ongoing flight of tens of thousands of people to neighboring countries.
The Cardinal told Fides: "For many people there is relative calm again. However, most of them have lost their homes, possessions, and even family or friends. Of course, mass crimes have decreased and this gives us hope for a better future. But there is no certainty because the rebels still exist and are armed on the outskirts of the city. However, the present moment must be used to create the conditions for reconciliation in society. We must try to envision their gradual integration into the social fabric so that they can return to decent work and forget about weapons once and for all. Without this change, it will be difficult to achieve peace. It is important to speak from the heart, with an awareness of the good of the country, so that everyone can overcome their own interests and have the common good in mind". The situation in the Central African Republic was also discussed at the second summit of the Regional Conference of the Great Lakes (Cirgl), which was recently held in Angola. This initiative and the simultaneous liberation of the cities from the rebels is seen as further progress for peace.
"I hope that the intentions are sincere - continued the Archbishop of Bangui - and that there is a real desire for peace because our country needs stability. The government has received help from Russia and Rwanda in the fight against the rebels, and the first finding is that at least 75% of the country's territory is under State control. Now we need to face the social drama of the population and encourage radical change. Change must come from the heart because not having weapons is not enough: A peaceful heart will undoubtedly lead to the fact that one no longer takes up arms "... The Cardinal recalled the tensions following the elections in December and March. President Faustin Touadera, he notes, was re-elected primarily because the people wanted peace and stability. "We strongly recommend that the new executive be made up of competent women and men", says the Cardinal. The Church has always played an important role in peace work and it is primarily about dialogue with Muslims, which is what the building of a new Central African society revolves around: "The Church - explains the Cardinal - helps all her children and promotes the protection of human life, making every effort so that those in favor of war and those who come from outside our Country with a desire to harm us may change their hearts.
The solution cannot only be military, and that mediation and support from the international community are required. Specifically, we always seek dialogue in a special way. Meanwhile, in late April, the President initiated deliberations and asked the Church to contribute. We will also be able to guarantee this thanks to informal work by parishes and movements. "Last December, Imam Omar Kobine Lamaya, President of the Higher Islamic Council of the Central African Republic and a great friend of the Cardinal, passed away. In the years of greatest need for Central Africa, the two became together protagonists of gestures of peace and mutual acceptance of communities, which made them symbols of genuine fraternity in the country and around the world, for they were a sign of real dialogue that is not limited to theory. Cardinal Nzapalainga recounts: "There is a dialogue of life that is very important. I recently visited the new imam and those responsible for Islam and those in charge of the Islamic community on the occasion of the beginning of Ramadan, and we brought them food to take with them at the end of the day. I believe that the dialogue between our two communities has really changed the mentality in our society: there are no more neighborhoods where only Muslims or only Christians live. When the rebels occupied the cities of Bangassou and Boua, the Imam, I, and a Protestant pastor went to meet them and said that human life comes first and that it is important to respect its holiness. This had a positive effect because the rebels saw and realized that men of God had come to meet them. We walked 7 km to go into the forest and speak to them directly to reduce the level of violence". (LA) (Agenzia Fides, 6/5/2021)