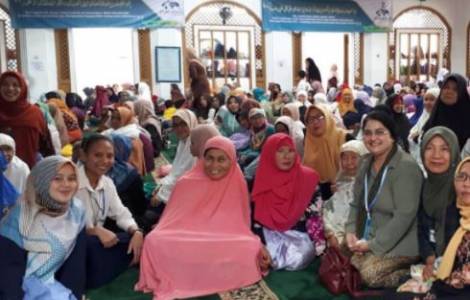 Jakarta (Agenzia Fides) - A Catholic nun, committed to promoting peace and interreligious harmony in Indonesia, has made the decision to share fasting, as a sign of spiritual communion, which the Muslim faithful experience during the month of Ramadan, sacred to the Islamic tradition. Sister Gerardette Philips, a 55-year-old nun of Indian nationality, of the Religious of the Sacred Heart of Jesus, has lived and carried out her mission in Indonesia since 2000. According to Fides, the idea of fasting during Ramadan came to her during Lent many years ago. It was 1991, she tells, and Lent and Ramadan coincided. During that period, she began practicing the spiritual weapon of fasting.
Taking care of disabled children, she found herself alongside a Muslim student who was also fasting: the two women shared that experience in a fruitful exchange. "I have been observing the fast during Ramadan for 30 years. It is a gesture of spiritual communion that the Muslim brothers appreciate. Fasting during Ramadan and during Lent, I live days full of grace, full of mercy, reconciliation and forgiveness. For me, this fast has a sense of closeness to God and of total giving to the poor", she said to Licas news. "Fasting does not mean giving up food. It is about creating a space and strength within yourself to receive God's mercy and love. Fasting helps us train our mind, heart and body. It is a commitment and requires discipline", explains the nun, noting that "fasting during Ramadam is a sign of solidarity, joy and friendship with our Muslim friends". Since the beginning, her vocation has been marked by an interreligious connotation: "Respect for Islam began in childhood. By joining the Religious of the Sacred Heart of Jesus in India, I embarked on a journey to encounter God in the hearts of my sisters and brothers, including those of Muslim faith", she reports. In the convent where she resided, there was a scholar who had a keen interest in promoting good relations between Christians and Muslims. Thus, the nun was able to nurture and deepen her passion for interreligious dialogue that, as she herself says, "helps us overcome prejudices and develop respect for others". Sister Gerardette Philips has a degree in “Special Education” from Jamia Millia Islamic University in New Delhi (India) and she has a Master's degree from SNDT University in Mumbai (India). She completed her studies in Theology at the Pontifical Jnana Deep Vidyalaya in Pune, and obtained a Masters in Islamic Philosophy and Mysticism from the Islamic College for Advanced Studies (in London) and Paramadina University (in Jakarta, Indonesia). She also has a PhD in Philosophy from Sekolah Tinggi Filsafat (STF) Driyarkara, in Jakarta. Sister Gerardette is currently a lecturer at the Faculty of Philosophy of the Parahyangan Catholic University and at the Department of Religious Studies of the Islamic State University of Bandung. She has also worked as a counselor at the Atma Jaya Catholic University in Jakarta and as a lecturer in psychology at the Paramadina University in Jakarta. In the past she has been a Consultant of the Pontifical Council for Interreligious Dialogue, in the Commission for Relations with Muslims, and today she is Director of the Formation of Novices of the temporary professed religious of her congregation, as well as animator of inter-congregational formation programs. Among her various activities, she deals with teacher training programs on topics such as interfaith tolerance, character education and peace building. Her sisters say of her: "The depth and breadth of her service to the Church and to the world are accompanied by a mystical and deeply human approach. She is truly an ambassador of peace and love wherever she is called to serve".
(SD-PA) (Agenzia Fides, 4/5/2021)