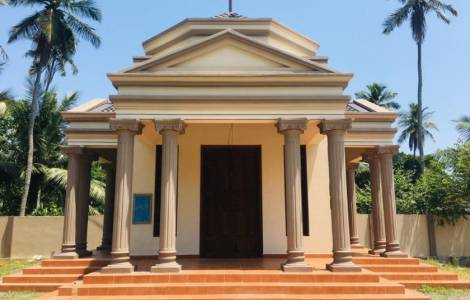 2021-11-22
Catholic priest stopped by the police: he asked for truth and justice on the Easter attacks

2021-10-11
Resignation and appointment of Bishop of Kandy

2021-09-08
Cardinal Ranjith: "The government has a duty to promote truth and justice on the Easter massacres, with a transparent investigation"

2021-07-24
Day of indigenous clergy and contribution to the Pontifical Society of St. Peter the Apostle

Colombo (Agenzia Fides) - "We invoke God and call on the government for justice. Tomorrow church bells across the nation will ring to commemorate the victims of the attacks of April 21, 2019, when terrorists committed a massacre in Sri Lanka. Then there will be 2 minutes of silence and the whole nation will stop to remember. Catholic schools will remain closed. And all 15 Bishops, with Catholic priests, religious and faithful, will inaugurate the new Chapel of the martyrs that we built in the cemetery in Negombo, the site of one of the attacks, thanks to the offers we collected with the international network of the Pontifical Mission Societies. Then there will be a silent march for peace and justice that will end at the church of St. Sebastian in Katuwapitiya, also in Negombo, one of the most damaged churches from the attacks. Here we will celebrate a solemn commemoration mass. All this to ask for God's help and to urge the government of Colombo to promote authentic justice for our martyrs": this is what Father Basil Fernando, National Director of the Pontifical Mission Societies (PMS) in Sri Lanka told Agenzia Fides, reporting on the day of commemoration that the Church in Sri Lanka, and the whole nation will live tomorrow April 21, 2021.
Communities of all religions (Muslims, Buddhists, Christians, Hindus) will unite spiritually to commemorate the victims and, the Director reports, "the Catholic faithful, directly affected by the attacks, will join in prayer vigils across the country. A candle will be lit or a light to remember broken lives and pray for their families, while we remember that many people are still in hospital, suffering or disabled, living the traumas and wounds of those attacks".
With the presence of all Bishops, the Sri Lankan Church will experience the official blessing of the new Chapel of the Martyrs, "financed and built thanks to the PMS network, especially the donations collected by Missio UK-Wales and Missio Scotland", reports Fr. Fernando.
The Director announces a commemoration program full of significant gestures to remember the attacks on Easter Sunday in 2019: "The Church calls for justice, as underlined by Cardinal Malcom Ranjith, Archbishop of Colombo, reiterating the urgency to shed light on the massacres. we ask: who is behind it? who planned it? Who are the authors? What are the responsibilities or omissions of the state security forces or apparatuses? These are questions that deserve answers. The State cannot avoid them. Justice is at the basis of peace, reconciliation, to make peace with memory, for prosperity and peaceful coexistence", notes the Director of the PMS.
In recent days, Cardinal Malcolm Ranjith asked for the intervention of an international court to independently investigate the Easter attacks of 2019. The then president Maithripala Sirisena at first stigmatized Islamic extremists, then the international network of drug traffickers wanted to target its commitment against trafficking. It is known that the authorities had received intelligence information prior to the massacre, but it was ignored.
On April 21 two years ago, nine terrorists affiliated with the local Islamist group "Thowheed Jamathha" attacked three churches and three luxury hotels, killing at least 258 people, including 37 foreigners, and injuring over 500 people. Seven bombs exploded in two Catholic churches (the church of St. Sebastian in Negombo and the sanctuary of St. Anthony in Kochchikade Colombo), and another in an evangelical church in Batticaloa, in the eastern part of the country. The church of St. Sebastian and the sanctuary of St. Anthony have been reopened to the faithful, but they need works to complete the renovation. Religious leaders have repeatedly asked the political authorities for greater efforts to prevent further attacks and bring the perpetrators to justice. (PA) (Agenzia Fides, 21/4/2020)