ASIA/VIETNAM - A "year of grace" for the diocese of Nha Trang, in the footsteps of Cardinal Van Thuan 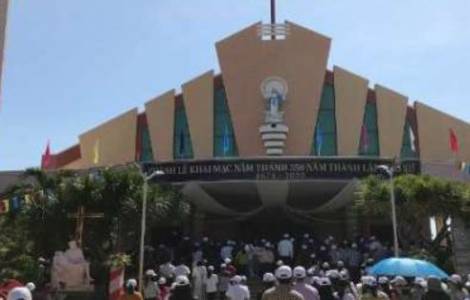 Nha Trang (Agenzia Fides) - He is a spiritual son and a successor of the former Bishop of the diocese of Nha Trang, Venerable Cardinal Francis Xavier Nguyen Van Thuan, who greatly influenced his priestly life and his episcopal ministry: Bishop Joseph Vo Duc Minh, current ordinary bishop of the diocese of Nha Trang, celebrates his 50th anniversary of his priestly ordination and remembers that April 24, 1971, when at the ordination mass, he became "a priest forever".
During the solemn mass of thanksgiving for the Jubilee of Ordination, Bishop Joseph Vo Duc Minh called on his clergy, religious and all the parishes of the diocese of Nha Trang to live a "close and fruitful communion with him in order to praise and thank the Lord". "The way of the Cross always opens up to the way of hope", he said, recalling the experience of Venerable Francis Xavier Nguyen Van Thuan, who addressed him some words that are still engraved in his memory as priest and pastor.
"Do not be afraid – said Van Thuan - the Lord Jesus will always be with you. Turn your gaze to the missionaries and martyrs in Vietnam. The way of the Cross always opens up to the way of Hope. Do not be afraid, but constantly trust God. I bless you and pray for you, I love you very much and I believe in you".
Today, the Bishop tells Fides that he lives his ministry with the spirit and the gaze that Venerable Van Thuan gave him: "We look to the past with grateful memory, thanksgiving and mercy; we look to the present with good will and with wonder at the discovery of God's works and the gift of his grace; we look to the future with a heart full of enthusiasm and trust in God's Providence".
The solemn thanksgiving mass celebrated in the cathedral of Nha Trang in recent days was attended by all the Vietnamese bishops who were gathered for the assembly of the Bishops' Conference, together with a large number of religious and faithful.
During the celebration, the first proclamation of the Gospel received in Nha Trang 350 years ago by the missionaries led by the French Bishop Pierre Lambert de la Motte, on 1 September 1671, was also remembered. Bishop de la Motte was the first Bishop of the Vicariate of Dang Trong. (Cochinchina) founded in 1659, covering the territory of South Vietnam, including today's diocese of Nha Trang. At that time, when local Catholics were subjected to persecution, Bishop de la Motte, a member of the Society for Foreign Missions of Paris (MEP), made his pastoral visit, accompanied by two French missionaries and two Vietnamese priests from Siam. The Bishop established Lam Tuyen Parish and founded the Congregation of the Lovers of the Holy Cross sisters, which today also celebrated the 350th anniversary of its foundation.
Emphasizing that "the Church loves and serves all peoples in the name of Christ, the only Savior, Bishop Minh said that the missionaries only came to bring the Gospel and bless this land". He then urged the faithful to be "grateful and proud of their ancestors who courageously witnessed the Good News", and to "live the faith today in harmony with others and helping the development of the nation". Bishop Joseph Vo Duc Minh was commissioned by the Vietnamese Bishops to start the preparatory phase for the canonical process of beatification of Bishop de la Motte.
The diocese of Nha Trang is a vast area of 9,487 square kilometers that covers two neighboring provinces Khanh Hoa and Ninh Thuan in south-central Vietnam, with a total of 180,000 Catholics out of 1,564,400 inhabitants.
In the 17th century, the territory of Nha Trang belonged to Dang Trong (the southern region) separated from Dang Ngoai (the northern region) which was divided by the long civil war of more than 200 years under the Le dynasty. The Trinh clan held power of the Northern region while the Nguyen ruled the Southern region. There were two ecclesiastical circumscriptions called Dang Ngoai and Dang Trong, established in 1658 by Pope Alexander VII, led by Bishops Francois Pallu and Pierre Lambert de La Motte. After the arrival of Bishop de la Motte and the subsequent growth of the local Catholic community, the diocese of Nha Trang was officially founded in 1957 and is today home to 115 parishes, served by almost 300 priests. (AD-PA) (Agenzia Fides, 19/4/2021)