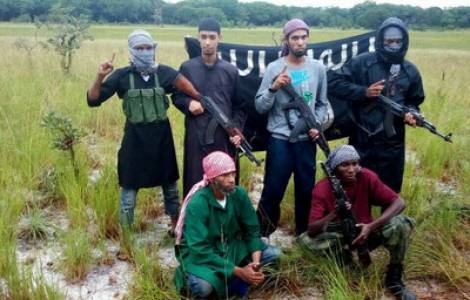 Maputo (Agenzia Fides) - At least 12 beheaded bodies have been found in Palma, the city in northern Mozambique, attacked on March 24 by a group of jihadists, who have declared to belong to the Islamic State (see Fides, 27/3/2021) . Among the 12 victims, one is of Zimbabwean nationality.
The city was taken over by the Mozambican army, but it is still difficult to establish the number of civilian victims of the assault. About 180 people of different nationalities who had taken refuge at the Amarula Hotel were trapped for more than 48 hours. After unsuccessful attempts to evacuate by helicopter due to heavy rebel fire, on March 26 an escape by land was attempted with a convoy of cars that was ambushed outside the hotel. Only seven out of 17 pickups managed to get out of the combat zone. At least seven people were killed, more than sixty are missing (see Fides, 29/3/2021). The city was isolated for at least 19 days, because the terrorists destroyed the telephone network, and sabotaged the Community Radio of Palma. The first reporters who arrived on the spot verified that at least three bank branches were looted for an amount equivalent to about 1 million dollars, while at least six tons of food were taken from the shops.
This suggests that the jihadists obtain their sources of livelihood from the territory, and that the group is a local phenomenon, the result of the strong discontent of the population due to the lack of benefits that were expected from the beginning of the exploitation of gas and oil in the area. But a recent British study claims that there are contacts between Mozambican extremists and the leadership of the Islamic State. "There is some kind of hidden formal communication between this particular network in Mozambique and ISIS as a global movement", says Mr Winter, of the International Center for the Study of Radicalization at King's College London, who points out that "both sides benefit of mutual propaganda and the expansion of the areas where ISIS can claim to be active".
Another study based on the testimonies of 23 kidnapped women who fled rebel bases in northern Mozambique reveal an organized group that recruits child soldiers and appears to be involved in the trafficking of girls abroad. "The group is presented by the media as a group of vandals and bandits, but they are much more prepared than we think. We have underestimated this group for many years. They have access to technology, information and professional specializations: there are people dedicated to telecommunications, filming, there are nurses, mechanics and others dedicated only to military action", underlines the author of the report João Feijó, researcher of the Observatório do Mundo Rural (OMR), a local NGO.
On Easter Sunday the Archbishop of Maputo, His Exc. Mgr. Francisco Chimoio, launched an appeal "to all of us Mozambicans to show solidarity with the displaced brothers in the province of Cabo Delgado". Mgr. Chimoio then made an appeal to "neighboring countries, so that together we can create authentic peace, a condition that truly allows everyone to live in peace". (L.M.) (Agenzia Fides, 13/4/2021)