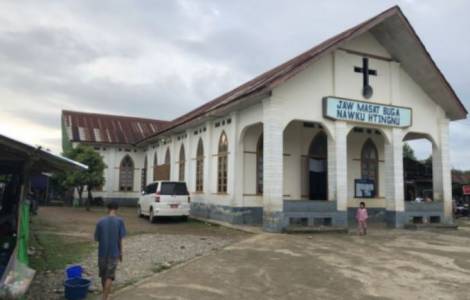 Yangon (Agenzia Fides) - Christian churches and Buddhist temples are subjected to continuous military raids and violent searches by the Burmese army, in search of hidden activists or alleged illegal activities. As sources of Fides confirm, in recent days the army raided numerous Christian churches of all denominations in Kachin State, claiming that a subversive activity was underway. The military raided Baptist Christian, Catholic and Anglican churches in the city of Mohnyin. The raids are also targeting Buddhist monasteries and temples across the country.
"These raids are deplorable and are blatant violations of religious freedom. Religious places are sacred. The entire population stigmatizes and is scandalized by the fact that one enters with weapons in hand in a sacred place, Buddhist churches and monasteries are regularly ransacked with violence. These are serious acts of intimidation by the army that are generating growing tension and hostility in the Burmese population of all ethnicities and religions", says Fides source. "The military identifies youth and protest leaders on social media and then then launches night operations to stop them", he says.
"The soldiers climbed over the fences and entered all the building in the complex, without any justification and searched all the spaces", said Reverend Awng Seng of the Kachin Baptist Convention (KBC), when recounting, still shocked, what happened in the Kachin State. Soldiers suspected that a protest leader was hiding inside the compound and that religious leaders participated in protests and initiatives against the regime. The security forces found nothing illegal in all of the searched churches.
"It is unacceptable to carry out these raids on a Christian religious site with armed personnel acting as if they were conducting a military operation. We strongly condemn it. If the army acts in this way in sacred places, we cannot imagine how it behaves in the private homes of people", remarked Rev. Awng Seng, reporting that the Kachin Theological College and the adjacent Baptist Christian Seminary in the capital of the Kachin State, Myitkyina.
The Kachin Baptist Convention which, with more than 400,000 members and 429 churches, plays a leading role in the Kachin State, recalls that "Christian, Buddhist, Hindu and Muslim religious communities preach truth and justice" stating that "such intimidating and violent raids are frightening".
The KBC has declared its opposition to the military regime and has held daily prayer liturgies for peace and justice, calling for federal democracy, equality, respect for freedom and human rights.
In recent days, security forces also raided a Baptist church in Lashio, in the northern Shan State, arresting 10 religious leaders and resident personnel for two days (all were later released), firing gunshots inside the church while looking for for anti-regime protesters. (PA-JZ) (Agenzia Fides, 9/4/2021)