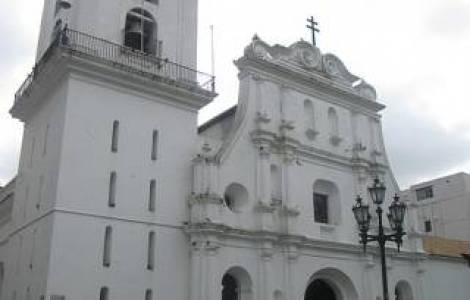 2021-04-09
The Bishops urge vaccinations: "We cannot wait any longer, the human being is above political diatribes"

2021-04-08
The path of the second National Pastoral Assembly: "An outgoing missionary parish for the new times"

2021-03-25
Bishops appeal in defense of great human values, against the imposition of the "culture of death"

Caracas (Agenzia Fides) - The Venezuelan Episcopal Conference (CEV) has presented the path of the II National Pastoral Assembly (ANP) in a program broadcast live through its Youtube channel. Several contributions outlined the phases that make up this synodal journey in which they will reflect on the theme of the Assembly: "An outgoing missionary parish for the new times". The first ANP took place in November 2015 (see Fides, 18/9/2015) and this second Assembly began in 2019, with the parish and diocesan assemblies.
According to the note from the CEV sent to Fides, the journey consists of a synodal journey, that seeks the participation of all the members of the Church in Venezuela, to reflect, dialogue and promote the commitment to be "an outgoing missionary parish for the new times", according to the chosen theme.
The first phase, "Accompany", is divided into two moments: Listening, in which the contributions of the parishes, archdioceses and dioceses are welcomed, and Dialogue, in which the common points of the previous moment are presented, inviting to reflect on them in the light of the four pastoral criteria: Kerigma, Koinonía, Liturgy and Diaconia.
In the second phase, "Fructify", they will reflect on the analysis developed in the first phase for four weeks. The first week, entitled "Let us walk in Assembly", will address the theme of the ANP taking inspiration from various documents of the Church that are added to the reflection. During the second week, "Let's not walk alone", the importance of communion and synodality for an outgoing Church will be reaffirmed. The third week, "Discerning what comes from God", will be a space to deepen the spirituality of the missionary parish, starting from the biblical quote of the Second ANP, "Go, therefore, and make disciples of all nations" (Mt 28:19). In the fourth week "Motivational and healing spaces", where what must be left behind in order to continue walking towards the Church in communion and going out for the new times will be decided.
In the third phase, “Celebrate”, the conclusions of the ANP will be presented in an event that will be broadcast on the CEV Youtube television channel. Finally, the fourth phase, "Convert", will be the stage to pass "from reflection to action", that is, to spread the conclusions obtained and translate them into concrete actions that generate the pastoral change of the Church in Venezuela towards an outgoing missionary parish for the new times. "This is - underlined Mgr. Mariano Parra, Archbishop of Coro - a crucial phase in order not to remain in the analysis, but to generate the pastoral transformation that the Church dreams of and of which Pope Francis speaks, a Church that is a field hospital, which reaches everyone, even in the suburbs". (SL) (Agenzia Fides, 8/4/2021)

ASIA/IRAQ - The Chaldean Patriarch Sako: our priests are good, criticism without charity is bad for the Church