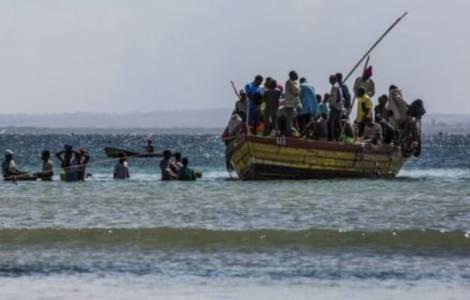 2021-04-13
Are the jihadists who conquered Palma part of a larger network?

2021-03-30
Hundreds of people evacuated from Pemba, where the situation is uncertain; concern for the children in the area

Maputo (Agenzia Fides) - Efforts continue to evacuate people trapped in the northern Mozambique city of Palma, despite the tense situation.
On March 24, rebel fighters attacked the city in Cabo Delgado province, near the border with Tanzania, killing dozens of people and wounding dozens. Several people are still missing. A note from ISIS, to which the local jihadist group claims to be affiliated, claims that 55 Mozambican soldiers have lost their lives in the fighting.
At least 120 people trapped in the Amarula hotel were rescued by the helicopters from a South African private military company, while others tried to escape by sea and by land, but ended up being victims in an ambush by the rebels (see Fides, 29/3/2021).
The testimonies of the fugitives and rescuers are dramatic, in the streets of Palma, the bodies of dozens of people lie, some of them beheaded.
Military sources report that with this attack the rebels, generically defined as Shabaab (like the Somali jihadists with whom they seem to have no relationship), who have been sowing terror in the province of Cabo Delgado since 2017, have made a qualitative leap. The assault was well coordinated and the jihadists used relatively heavy weapons, such as mortars and grenade launchers.
While the situation in Palma remains uncertain, UNICEF has raised the alarm on the situation of children in the Mozambican province. "We do not yet know the full impact that the deadly attack by militants in Palma, in northern Mozambique, has had on children, but we fear it will be terrible", said a note sent to Agenzia Fides. Palma was already home to more than 35,000 people forcibly displaced from other parts of the province as a result of previous attacks", UNICEF underlines. "Half of them are children. In recent months, the district has been isolated due to insecurity, with minimal supplies and assistance by air and sea. Until small amounts of food and other supplies began to arrive, much of the district, beyond the provincial capital, was virtually inaccessible to humanitarian workers who struggled to provide assistance. To date, the three health facilities still functioning are no longer operational and the main hospital has been destroyed".
But not all war crimes and crimes against humanity can be attributed to the Shabaab. "The people of Cabo Delgado are trapped between the Mozambican security forces, the private militias fighting alongside the government and the armed opposition group known locally as ‘Al-Shabaab’ - none of whom respect their right to life or the rules of war", said Deprose Muchena, Amnesty International's Regional Director for Eastern and Southern Africa.
"All three have committed war crimes, resulting in the deaths of hundreds of civilians. The international community has not addressed this crisis, which has turned into a large-scale armed conflict in the last three years". (L.M.) (Agenzia Fides, 30/3/2021)