AMERICA/CHILE - "Broaden your gaze" urges Archbishop Chomali for the April elections, with the possibility of postponement due to Covid 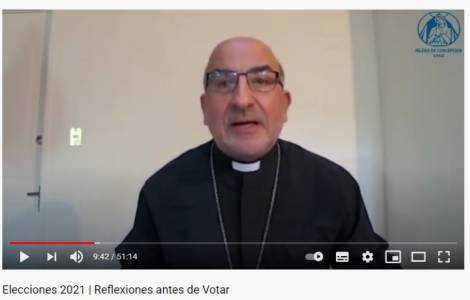 Concepción (Agenzia Fides) - With a virtual meeting through Zoom, broadcast on social media and broadcast by Radio Chilena Concepción, the document "Reflecting before voting on April 10 and 11" was presented, written by Mgr. Fernando Chomali, Archbishop of Concepción ahead of next month's elections. According to the latest information from the local media, due to the pandemic, a request was made to postpone the electoral appointment for the appointment of 155 members of the Constituent Assembly, 17 governors, 345 mayors and more than a thousand municipal councilors. The Chilean Minister of Health, Enrique Paris, has announced that he has taken note that the Covid Advisory Committee has unanimously asked the government to postpone the vote.
Mgr. Chomali, in the document sent to Fides, stressed the need to "broaden our gaze": "We must not only look at what is happening in the region, not only at what is happening in Chile. We must look at what is happening in the world, we are experiencing dramatic events that afflict the contemporary world, where there are situations that cryout to heaven, which implies having a new perspective".
Then he recalled that "the Social Doctrine of the Catholic Church has values, principles that are tremendously current and that in some way can enlighten the conscience to vote correctly. This is therefore an ethical reflection that has its roots in a vision of man".
"Our transcendent condition - he continued - has a profound meaning also in the dimension of work, through which we can generate brotherhood, there are experiences that can help us along that line. We believe above all that man is the foundation, the end and the cause of social institutions".
After having enunciated 10 pieces of advice, the Archbishop referred to the situation of the country in the current health crisis, asking for a great commitment from the community: "I ask you to stay at home and follow the rules that are already known".
The Church in Concepción, like all of Chile, is preparing to live Holy Week under strict safety regulations to avoid the increase in Covid cases, which the good vaccination campaign cannot stop especially in some cities.
On the social media of the main news media of the country, the scene of what happened in Valparaiso hit a lot: the health system of that city collapsed and there was no more place for the deaths of Covid, so the main hospital in the city, Carlos Van Buren Hospital, decided to park a huge fridge truck behind the hospital to freeze the corpses.
According to the latest epidemiological report from the Chilean Ministry of Health, 54,136 active cases were registered as of 25 March. To that date, 1,125,521 cases have been registered, of which 962,321 confirmed by the laboratory and 163,200 probable, and more than 23,000 deaths. (CE) (Agenzia Fides, 29/3/2021)

AMERICA/ECUADOR - Bishops appeal after the second round of presidential elections