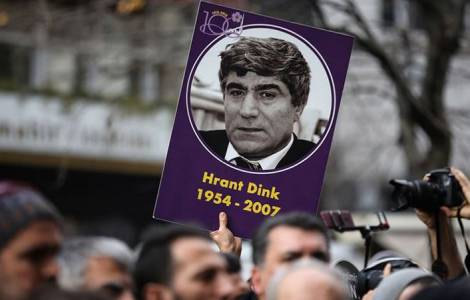 Istanbul (Agenzia Fides) - The trial for complicity in the murder of Armenian journalist Hrant Dink, a leading figure in the local Armenian community, killed by a hitman in 2007 in central Istanbul, in front of the headquarters of Agos, a bilingual Turkish-Armenian newspaper that he himself had founded. The sentence handed down by the Istanbul court on Friday, March 26, sentenced many of the 76 defendants to life sentence. Nevertheless, the relatives of the victim and the associations that arose in his memory have already announced their intention to appeal, considering that the sentence has not clarified all the dark aspects of the story and has not identified the instigators of the crime perpetrated 14 years ago.
Hran Dink, an Armenian journalist of Turkish nationality, was known for his commitment to the full integration of the Armenian community into Turkish society, putting aside discrimination, suspicion and prejudice, inherited from the tragic events that marked the history of the Armenians in Turkey. His murder, experienced as further trauma by the Turkish Armenian community, set in motion a process that lasted over a decade, with investigations into the involvement of senior security officials suspected of being part of the network that plotted the murder or of having somehow endorsed his execution.
The Istanbul Court sentenced former Istanbul police intelligence Chief Ramazan Akyurek to life imprisonment for "premeditated murder", together with his former deputy Ali Fuat Yilmazer. Former Istanbul Interior Ministry officials Yavuz Karakaya and Muharrem Demirkale have also been sentenced to life imprisonment, while former Trabzon gendarmerie commander Ali Oz has been sentenced to 28 years in prison and journalist Ercan Gun to 10 years. Ogun Samast, an ultra-nationalist from Trabzon, 17 at the time of the murder, had already admitted his guilt as the material perpetrator of the crime in 2011, and is already serving a sentence of more than 22 years in prison.
After the verdict, the family and friends of Harant Dink have announced their intention to appeal and request that the investigation continue, considering that the sentences handed down do not shed all the light on the instigators of the murder.
The singularity of the trial consists in the fact that, in recent years, prosecutors conducted investigations through the alleged links between the suspects and the Hizmet network, an organization linked to Fethullah Gülen, the Turkish preacher, exiled in the United States since 1999, accused by Turkey of being the architect of a failed coup against President Recep Tayyip Erdogan on July 15, 2016.
According to the judges, the crime was organized by men linked to Gülen who "infiltrated" the Turkish security apparatus. Gülen himself was on the list of accused at trial, and his position was withdrawn, along with that of 12 other defendants. The NTV television channel, in reporting the sentences, reported that according to the Istanbul Court, the murder of Dink was committed "in line with the objectives of FETÖ" (Turkish acronym for "Fethullahnista terrorist organization", definition used by Turkish pro-government bodies to indicate the "subversive" network supposedly led by Gülen). (GV) (Agenzia Fides, 27/3/2021)