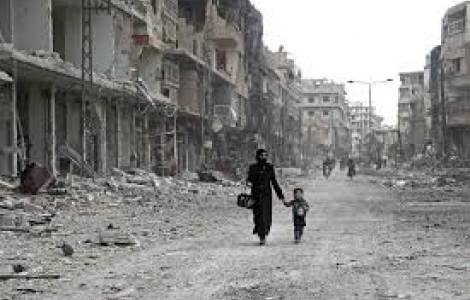 Damascus (Agenzia Fides) - The economic sanctions and boycott of Syria, in addition to the Caesar Act, has negatively affected the lives of Syrian citizens, "at the core of their daily lives", so much so that "the garbage containers in the streets became a source of food for the poorest". It is through this image of ordinary and daily affliction that Riad Sargi, Executive Director of Caritas of Syria wanted to tell the nightmare present inflicted, also due to the international economic boycott measures, on the most vulnerable section of a people exhausted by ten years of war and violence.
The humanitarian catastrophe in Syria is recalled in the message-appeal issued yesterday, Tuesday 23 March, by Caritas Internazionalis to invoke the suspension of the sanctions against the Syrian government but which, in fact, affect the weakest sectors of the local population.
The appeal by Caritas Internationalis, launched in view of the Vth Donors' Conference for Syria of the European Union, scheduled for the end of this month in Brussels, was released at the end of the online Conference: "Church and Caritas: 10 years of humanitarian response in Syria", in which Cardinal Mario Zenari, Apostolic Nuncio to Syria, participated. In his speech at the conference, the Secretary General of Caritas Internationalis, Aloysius John, declared that the Catholic organization joins the Churches present in Syria in their request to "lift unilateral sanctions, which were introduced at the beginning of the war; to increase access to services and healthcare, including COVID-19 vaccines for the suffering people of Syria; to ensure support to the NGO, in particular the faith-based organisations; a negotiated peace, avoiding continued stalemate, which only results in untold sufferings to innocent civilians". The Caritas Internationalis press release recalls that ninety percent of the Syrian population has plunged into poverty as a result of ten years of war, international sanctions, the coronavirus pandemic and economic crisis. A third of the population has fled the country and 12.4 million people do not have reliable access to food and
heating.
"It is true" - acknowledged Cardinal Zenari in his speech "that bombs and rockets have not fallen on various regions of Syria for some months. However, the terrible "bomb" of poverty has esploded". The Apostolic Nuncio also drew attention to the fact that the humanitarian support guaranteed by international organizations cannot "continue forever".
In its press release, Caritas Internationalis announces its intention to focus its future initiatives in Syria on supporting the resumption of school and educational activities in favor of Syrian children. The years of conflict have disrupted the Syrian education system, putting at least 2.4 million young people in danger of dropping out of school.
In January, as reported by Agenzia Fides (see Fides, 22/1/2021), a letter-appeal signed by qualified representatives of Middle Eastern Churches and Christian communities, had asked the new US President Joe Biden, who had just taken office, to cancel as quickly as possible the economic sanctions weighing on the Syrian people as an unjustifiable "collective punishment" and which make the Syrian "humanitarian catastrophe" a major factor of instability for the entire Middle East . The letter in question had been signed by the Patriarch of Antioch of the Syrians, SB Ignace Youssef III Younan, the Patriarch of Antioch of the Greek Melkites, SB Youssef Absi, the Syrian Orthodox Patriarch Ignace Ephrem II and by the Secretary General of the Middle East Council of Churches, MECC. (GV) (Agenzia Fides, 24/3/2021)