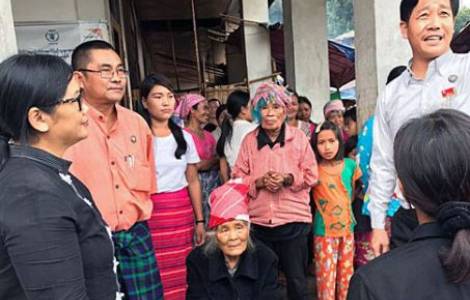 Yangon (Agenzia Fides) - "We are currently witnessing a real escalation of military violence. Yesterday alone, in Yangon and the surrounding area, we counted 189 dead, as reported by the Myanmar Now information network, which includes many activists. In our view, however, the dead could even be more. The repression is getting tougher and the population is suffering terribly, but is not giving up", says a source of Agenzia Fides in the Catholic community of Yangon, who asks to remain anonymous for security reasons. This same source describes the situation of tension in the country, where the peaceful protest of young people, which began after the coup of 1 February, shows no signs of abating, despite an increasingly fierce response from the army.
In the face of this violence, the leaders and religious workers of the different faith communities remain alongside the population through prayer, moral and material assistance, helping to comfort the afflicted and to care for the wounded (see Fides, 16/3/2020).
In this scenario, in a message sent to Agenzia Fides, the Commission of Buddhist monks of Mandalay, who are part of a spontaneous organization called "Protest network of Buddhist monks", warns the military who are occupying temples, monasteries and Buddhist places of prayer, calling for an immediate end to the violence of the army and the occupation of their buildings.
Should the army continue to use violence, Buddhist monks declare their readiness to march through the streets, organizing silent marches of protest across the country.
Meanwhile, Myanmar's military junta has put in place restrictive measures against international and local NGOs through financial instruments and channels: the country's Central Bank has ordered private banks across the country to present all NGO bank accounts by today, 16 March 2021.
As Fides learned, the military junta intends to block and intimidate civil society organizations suspected of providing financial support to the Civil Disobedience Movement or of having provided political and economic support to parties such as the "National League for Democracy" or to social and political organizations that do not support it. The military body of government has already taken control of the "Open Society Foundation" (OSF), belonging to George Soros, announcing that it will take legal action against the Foundation, accused of violating NGOs regulations.
Among the organizations checked and subject to an official investigation, there are also the NGO OXFAM and "Karuna Mission Social Solidarity", that is to say the Caritas of Burma. All NGOs are required to report all financial transactions with foreign countries.
Agenzia Fides has learned that the offices of "Karuna" in the Dioceses of Hakha and Loikaw have already been visited by army officers who have also had controls in all the other sections and diocesan offices of Caritas in Burma.
Military officials asked Caritas officials what kind of support they offered during the national elections in November 2020. "Karuna" reiterated that his activity is charitable, humanitarian and social and that he does not support any political party. (PA) (Agenzia Fides, 16/3/2021)