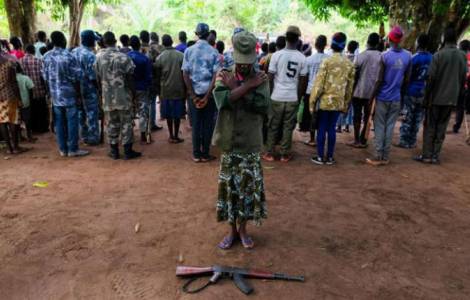 Yambio (Agenzia Fides) - The recruitment and involvement of children in conflict remains the most common type of violation against minors in conflict in South Sudan. In the state of Western Equatoria, nearly 100,000 children and adolescents have suffered serious violations, including child soldiers.
In recent days, the news that the Diocese of Tombura-Yambio, always committed to supporting the weakest strata of the population, officially entrusted the National Commission for Disarmament, Demobilization and Reintegration (DDRC) with a former child soldier. The note sent to Agenzia Fides shows that the operation took place through the Department for Women and the Office in charge of family on February 24, 2021. The former child soldier who, for the occasion, met the Bishop of Tombura-Yambio, Msgr. Eduardo Hiiboro Kussala, had intentionally approached the church as the safest place that could welcome him and protect him from the deleterious experience that had been imposed on him during his forced recruitment.
Hossan Valent, head of human resources at the diocesan Curia, said he welcomed the teenager following his response to the UN appeal for children recruited by former rebels fighting against the government of President Salva Kiir between 2015 and 2018, urging them to return home.
The hope of the Diocese of Tombura-Yambio is that all the children recruited will return home and that none of them will remain in the forest to fight on behalf of the government or the various opposition forces in the country.
"It is our responsibility to educate these young people to be responsible citizens and help them free themselves from the violent mentality as well as offering them opportunities to become resourceful people in society", said Ngbanisa David Ariyo, deputy director of the Catholic Organization for Development and Peace [CODEP].
Most of these young victims were taken by the armed forces and turned into violent and ruthless individuals. "The South Sudan People's Defense Force (SSPDF) must work hard to ensure that children are never recruited again", said Abraham Agit, member of the SSPDF, praising the action of the Diocese of Tombura-Yambio for having supported the DDRC.
"It is the responsibility of the National Commission for Disarmament, Demobilization and Reintegration to work to ensure that there are never any more children in the ranks of the armed forces", said Abel Likambo Ungarani, member of the said Commission and Acting Coordinator for the State of Western Equatoria, adding that the young people will be brought to the Child Transit Center at the Ministry of Social Development and the Welfare of Minors. The National Commission for Disarmament, Demobilization and Reintegration disarmed the children and reintegrated them into different communities, returning them to their families, some in neighboring countries such as the Democratic Republic of the Congo and the Central African Republic. Most of these former child soldiers had been abducted by the Lord Resistance Army (LRA). (AP) (Agenzia Fides, 12/3/2021)