ASIA/MYANMAR - The religious stop the military: "Every life is precious. Do not kill" 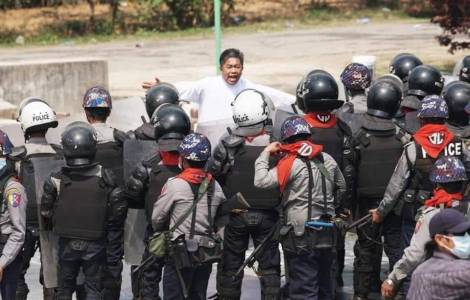 Myitkyina (Agenzia Fides) - "We ask not to kill. This is why we have turned to the military. We fear that police officers will kill more young demonstrators. Our presence as people of faith, peacemakers, may help them stop. This is why we are here on the street", said Catholic nuns in the city of Myitkyina, capital of Kachin State, where in the last two days young demonstrators, who took refuge in the complex of the Catholic Church were killed by the police (see Fides, 8/3/2021).
Yesterday, 8 March, two young demonstrators were killed and at least 7 injured and the police, who surrounded the Church, arrested 91 people during the night, as local Fides sources report. The nuns and Bishop emeritus Mgr. Francis Daw Tang took to the streets and tried to reassure and convince the police not to use force against unarmed young people.
According to Fides sources, the military junta has ordered increasingly serious repressive measures on the streets, while several independent mass media have been blacked out. It is also feared that the junta could impose a strict curfew at any time to prevent all forms of protest.
In Myitkyina, the intervention of Catholic religious prevented a massacre, but the killing of the two young people caused outrage, sadness and bitterness. Despite the ongoing violence, Catholic faithful and people from various religious communities gathered in silence in front of the Catholic Church of St. Columban and prayed for the two young people who were killed and their families. Among them was the bishop emeritus of the Diocese of Myitkyina, Mgr. Francis Daw Tang, who told Fides: "I am retired, but charity does not retire. In this difficult moment for our country, we as Christians are called to offer our contribution of peace, mercy, forgiveness".
Christians in Myanmar are living their Lent, in a time of tension and instability, with faith and with prayer that becomes an action of charity. Sister Ann Nu Tawng, the nun who has become an "icon of peace", for having kneeled down in front of the advancing security forces, repeated the heartfelt appeal and said: "We preach and bear witness to the choice of evangelical non-violence. Our mission is to announce and live the love of Christ fully, even towards the enemy".
As Fides has learned, even in the city of Loikaw, capital of the Burmese state of Kayah, where the baptized are 90% of the state population, hundreds of young demonstrators marched today, 9 March, on their way to the Catholic Church of Christ the King. The police tried to stop the demonstrators with street blocks. At that point, the Catholic priest Father Celso Ba Shwe, who has administered the diocese since the bishop's death, and a Protestant pastor, tried to avoid the clash.
They asked the security officers not to shoot the marching demonstrators. "We will convince them to go home. Give us some time. We do not want any more blood to be shed", said Father Celso Ba Shwe while trying to prevent the violence. His heartfelt and courageous attempt at mediation had an effect: the military only used water cannons and firecrackers to disperse the crowd and there were no victims.
"Every life is precious. This is what we want to say today with our actions that are only inspired by faith", Father Celso Ba Shwe told Fides. (PA) (Agenzia Fides, 9/3/2021) 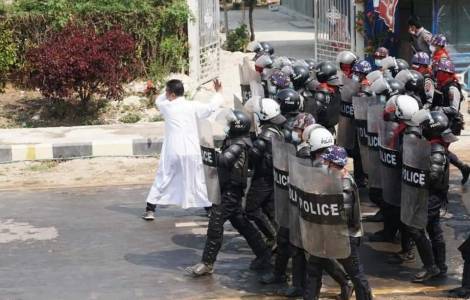 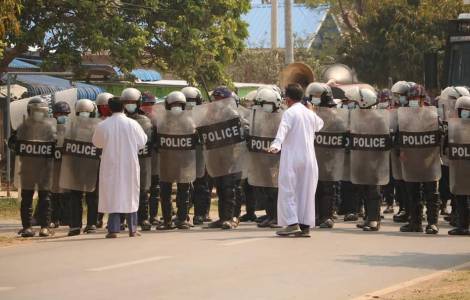