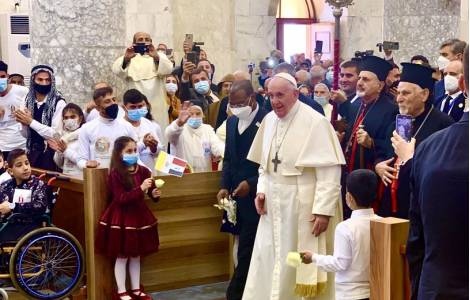 2021-03-30
Arab media: a "government committee" will work on suggestions that emerged during Pope Francis' visit

2021-03-07
Pope Francis in Mosul, Qaraqosh and Erbil: "Christ is alive and at work in his holy and faithful people"

2021-03-05
Iraqis waiting for the Pope, bearer of hope for all through universal solidarity

Mosul (Agenzia Fides) - "Today, I can see at first hand that the Church in Iraq is alive, that Christ is alive and at work in this, his holy and faithful people", said Pope Francis at the end of his homily in Italian at the Holy Mass in Franso Hariri Stadium in Erbil, which took place on the afternoon of March 7th in front of around ten thousand worshippers. This was the last public appearance of a memorable visit to Iraq. The Pope seemed moved and satisfied with what he saw on the third day of his short and intense pilgrimage in view of the pain and expectations of the Iraqi people: on a sunny day with a busy program, the almost 85-year-old Successor of Peter saw the difficulties with his own eyes and gave hopes of rebirth to the Iraqi people and the local Christian faith community by traveling between Mosul, Quaraqosh and Erbil, the capital of the autonomous region of Kurdistan. Three key places, that were affected in different ways by the wave of the advance of the so-called Islamic State (IS), which shook the whole of northern Iraq from 2014 to 2017, sowing grief, devastation and thus wounds in the territories that are still in the hearts of those who remained and those who fled far away. Many areas that have been turned into cemeteries and refugee camps that have emerged between the Nineveh plain and Erbil still bear witness to this today. It was precisely in these places that the Successor of Peter saw the miracle of a living community of faith, a simple and poor people of God, which, as a result of the hardships of recent years, dwindled in number, but continues to draw on the inexhaustible source of the faith of the Apostles. Men and women, young people and children, who also told him about the sufferings and blows suffered in the recent past without complaining about them. Rather, they testify – like the Syrian Catholic priest Ammar Yako in his testimony to the Pope in Qaraqosh, that even the years he and his parishioners spent as refugees who were driven from their homes were not "cursed years", but blessed by the Lord who showed his glory", and now gratefully fills the hearts of those who experience "the miracle of bringing life back to this city". "The Lord", added the priest in his testimony, "has not abandoned us, and what a joy it is to see His Holiness among us today... who would have thought of seeing his presence in this small town ... ".
The jihadists of the Islamic State (Daesh) had built their stronghold in Mosul. At least 500 Christian families left the city during the siege. After the military interventions that put an end to the Islamic State, only around seventy have returned. In the heart of the old city, which is still littered with rubble and bombed-out buildings, the Pope reaffirmed the conviction that "brotherhood is stronger than fratricide" and the hope that even those "who pervert the name of God cannot destroy" by treading paths of destruction". In Hosh al-Bieaa square, surrounded by four churches that were desecrated and destroyed during the jihadist occupation, the Pope read a prayer for the victims of the war. "If God is the God of life – for so he is – then it is wrong for us to kill our brothers and sisters in his Name. If God is the God of peace – for so he is – then it is wrong for us to wage war in his Name. If God is the God of love – for so he is – then it is wrong for us to hate our brothers and sisters".
In the prayer, which was understood as a request for forgiveness, the Pope remembered the prophet Jonah, who was sent by God to preach conversion to the inhabitants of the city of Nineveh (today's Mosul): "Lord, we now entrust to you the many victims of man’s hatred for man. We too implore your forgiveness and beg the grace of repentance", said the Pope who appealed to pray "without delay" so that this city and this country can be rebuilt, and hearts torn by grief can be healed" and prayed also for all "those who caused such harm to their brothers and sisters. May they repent, touched by the power of your mercy". In his brief speech before the prayer, Pope Francis also reminded that the "real identity of this city is that of harmonious coexistence between people of different backgrounds and cultures", which is why he hoped "that the Christian community may return to Mosul and to take up their vital role in the process of healing and renewal".

In Qaraqosh, where he arrived on the helicopter, Pope Francis was welcomed by a cheering crowd from the other villages of the Nineveh Plain, who awaited him for the Angelus prayer, hosted at the Syrian Catholic Church of “Immaculate Conception” , which had been converted into a military garrison during the jihadist occupation. Today the sanctuary has returned to its former glory, and in January (See Fides, 15/1/2021) the statue of the Virgin Mary was again placed on the bell tower, and stands out on the skyline of the city. "We welcome you, as Nineveh once greeted Jonah, who came to convert the people from their sins", said the Syrian Catholic Patriarch Ignace Youssef III Younan. "Our gathering here today shows that terrorism and death never have the last word. The last word belongs to God and to his Son, the conqueror of sin and death", the Pope said in his address before the Angelus prayer. The Pope reminded those present "of your fathers and mothers in faith, who worshipped and praised God in this place. They persevered with unwavering hope along their earthly journey, trusting in God who never disappoints and who constantly sustains us by his grace". Contrary to the prophecies of all those who foretell the imminent extinction of the Christian communities in Iraq and throughout the Middle East, the Successor of Peter encouraged the Christians of the Nineveh Plains with words of faith: "Now", the Pope said, "is the time to rebuild and to start afresh, relying on the grace of God, who guides the destinies of all individuals and peoples. You are not alone! The entire Church is close to you, with prayers and concrete charity". According to the Pope, the blessings of God on this earth are above all the "living fruits of faith". For this reason, the most intimate comfort the Pope gave to the baptized in those lands was not the promise of material support from the outside, but the encouragement to "not forget who you are and where you come from!". "Certainly there will be moments" - the Pope continued - "when faith can waver, when it seems that God does not see or act. This was true for you in the darkest days of the war, and it is true too in these days of global health crisis and great insecurity. At times like these, remember that Jesus is by your side" and that "from heaven the saints are watching over us. Let us pray to them and never tire of begging their intercession".
In Erbil, the capital of the Autonomous Region of Iraqi Kurdistan, the Pope presided over the Eucharistic liturgy celebrated late in the afternoon. A large number of regional political institutions also took part in the last public act of the papal visit, at the Franso Hariri Stadium, addressed by President Nechirvan Barzani. "Jesus" - the Pope said during his homily - "offered to the Father the wounds by which alone we are healed. Here in Iraq, how many of your brothers and sisters, friends and fellow citizens bear the wounds of war and violence, wounds both visible and invisible! The temptation is to react to these and other painful experiences with human power, human wisdom. Instead, Jesus shows us the way of God, the path that he took, the path on which he calls us to follow him". But - continued the Pope - "we are not able to purify our hearts, we need Jesus. He has the power to conquer our evils, to heal our diseases, to rebuild the temple of our heart". "Jesus not only cleanses us of our sins, but gives us a share in his own power and wisdom". "With the power of the Holy Spirit, he sends us forth, not as proselytizers, but as missionary disciples, men and women called to testify to the life-changing power of the Gospel.
The Church in Iraq, concluded the Pope "by God’s grace, is already doing much to proclaim this wonderful wisdom of the cross by spreading Christ’s mercy and forgiveness, particularly towards those in greatest need. Even amid great poverty and difficulty, many of you have generously offered concrete help and solidarity to the poor and suffering. That is one of the reasons that led me to come as a pilgrim in your midst, to thank you and to confirm you in your faith and witness. Today, I can see at first hand that the Church in Iraq is alive, that Christ is alive and at work in this, his holy and faithful people".
In the final greeting, the Pope summed up his heartfelt gratitude for the things seen and heard during his apostolic visit, and at the same time formulated a request to the Christians in Iraq and all of their fellow citizens: "Now the time draws near for my return to Rome. Yet Iraq will always remain with me, in my heart. I ask all of you, dear brothers and sisters, to work together in unity for a future of peace and prosperity that leaves no one behind and discriminates against no one". (GV) (Agenzia Fides, 7/3/2021)