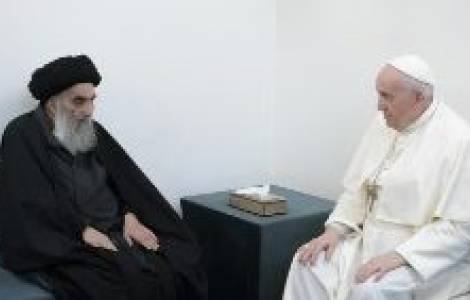 2021-04-12
The Chaldean Patriarch in the 'message for Ramadan': let's remove the definitions that offend Christians from school texts

2021-03-30
Arab media: a "government committee" will work on suggestions that emerged during Pope Francis' visit

2021-03-07
Pope Francis in Mosul, Qaraqosh and Erbil: "Christ is alive and at work in his holy and faithful people"

ASIA/MYANMAR - Franciscan appeal: "Now is the time for the international community to act in order to restore peace and democracy"

ASIA/MYANMAR - New appeal from the Pope, Sister Ann Nu Twang: "He is close to our suffering people"

ASIA/LEBANON - Support of the Greek Melchite Episcopate for "Lebanese neutrality"

VATICAN - Pope Francis' gratitude for his trip to Iraq: "Muslims invite Christians to return, and rebuild churches and mosques together"