AMERICA/CHILE - Testimony of a long-term Spanish missionary and the presence of Jesus Christ, the Good Samaritan 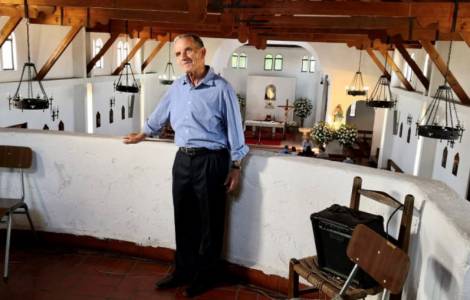 2021-04-16
The drama of migrants continues, amid hypocrisy, Covid and a new, more rigid law

Santiago (Agenzia Fides) - In Spain, the Hispanic-American Day will be celebrated next Sunday and for the occasion, Agenzia Fides has received from the Archdiocese of Toledo the testimony of Father Félix Zaragoza, the only diocesan priest of Toledo who is a missionary in Chile. He is there with 10 other religious and lay missionaries from the same Spanish Archdiocese.
Chile was one of the Latin American countries in which the first presence of diocesan priests of Toledo was registered who,
through OCHSA (Obra de Cooperación Sacerdotal Hispanoamericana), were sent by the Archbishop of Toledo to live the missionary commitment together with local Christian communities.
Father Félix Zaragoza, originally from Villacañas (Toledo), has already spent 32 years of missionary service in the outskirts of Santiago de Chile, "a city which has a third of the total population of the country", and underlines that his parish, "in which I am alone, is made up of a young population and has more than 50,000 inhabitants". Although he is the only priest, he nonetheless emphasizes "the collaboration of the laity".
Among the activities of the Niño Dios de Malloco parish, located in the Municipality of Peñaflor, Father Félix points out that, next to the church, the parish runs a school with about 2,000 students including more than 400 children to look after in the kindergarten. In addition, it also has a residence - home for the elderly, with "70 elderly people, who, in this pandemic situation cannot receive visitors and where unfortunately many have died". The parish also has a pharmacy to provide medicines and organizes "community pots, as we call them here, to prepare the food collected and give everyone something to eat".
These charitable and solidarity actions are carried out because "we believe that the Church, especially in a time of strong secularization like the one we are currently experiencing in Chile for different reasons, must make the presence of Jesus the Good Samaritan a reality". He recalls that "solidarity is real in service, especially of the most vulnerable".
Father Félix Zaragoza thanks the diocese of Toledo for their collaboration in the missions, and asks to continue to remember him for his ministry, which he carries out "in a parish where the majority considers themselves Catholic, with more than 50,000 inhabitants for a single priest to celebrate Mass , with more than - 700 baptisms, 300 communions and some 200 confirmations in 2020 as well as more than 700 funerals".
This is why, Father Félix asks for prayers, in order "to be able to continue to carry out the mission within this community, with these people, because the Church needs to bear witness to faith and commitment". He indeed wishes to recall that "Evangelization must also be a process of humanization, of a dignified life", which is why we start from the youngest children who attend nursery schools, up to the nursing home, to give them a whole life as dignified as possible. (CE) (Agenzia Fides, 5/3/2021)