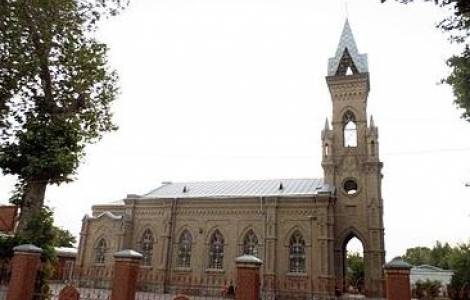 Samarkand (Agenzia Fides) - "A month has passed since our arrival in Samarkand. During this first phase, we seek to define pastoral priorities. For example, we think that we have to launch maintenance works in the St. John the Baptist Church. It is a very beautiful building of worship, built 105 years ago in Gothic style, visited by many tourists, but also a bit old and empty. This is why we believe that it is necessary to refurbish it and, at the same time, strengthen its identity and decorum, so that whoever enters feels welcomed. Two other areas of commitment are the launching of new works of charity and the creation of an oratory in Salesian style, a point of connection between the charisms of our Congregation. We would like to set up a football pitch, a volleyball court and create a space where young people have the opportunity to spend time.
The objective, as Don Bosco said, is to bring out the beauty of God through play, the joy of being together and fraternity". This is what Father Ariel Alvarez Toncovich, from the Institute of the Incarnate Word, recently appointed Parish priest of Saint John the Baptist of Samarkand in Uzbekistan, told Agenzia Fides.
After spending 8 years on a mission in Kazakhstan, Fr. Alvarez was sent to Samarkand together with his confrere, Fr. Paolo Giacinti, in order to revive the pastoral activity of the local parish, without a priest for a long time. "In this city, during the nineties, lived a large number of Catholics. On the basis of the parish archives, we found traces of meetings and retreats in which more than a hundred people participated. The economic crisis of recent years has led many of them to return to their countries of origin, especially Poland, Germany, Ukraine. To this, we must add the fact that, for about three years, the community did not have a parish priest, but was assisted, as much as possible, by priests from other cities who came here during the weekend. Without a fixed point of reference, the faithful have dispersed a bit. Now we are two and we will try to make our presence felt. From a pastoral point of view, there is a lot to do".
The community of the faithful of Samarkand is currently made up of a small group of 20 to 30 people, which includes a dozen children, some adolescents, their parents and some women over eighty: "These elderly ladies represent for us true heroines of the faith, because they lived the period of repression of the USSR, keeping in their hearts the faith and transmitting it. The children come from Catholic families, almost all of them have already made their first communion and are attending catechism to prepare for confirmation. We will focus a lot on formation, despite the small numbers, so that those who will approach in the future can recognize in the eyes of this small community the evangelical spirit. There is a lot to do but I am optimistic", he concludes.
In addition to that of Samarkand, in Uzbekistan there are four other parishes and about 3,000 baptized: there are about 700 faithful present in the capital Tashkent, in addition to others present in Bukhara, Urgench and Fergana. In Angren, where the construction of a new Church is planned, there are 25 faithful. The Uzbek population, made up of 30 million inhabitants, is 90% Muslim. About 3.5% are of the Russian Orthodox Christian faith, while another 3% include small Christian communities of other denominations, including Catholics. (LF-PA) (Agenzia Fides, 3/3/2021)