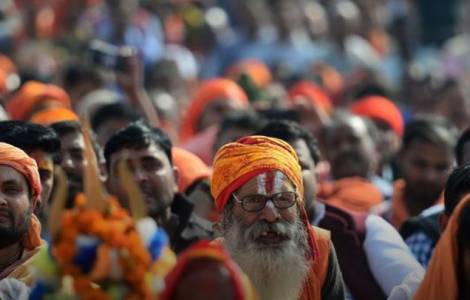 2021-12-04
The Indian faithful honor Francesco Xavier, Patron of the missions

Lucknow (Agenzia Fides) - Uttar Pradesh, the most populous state in northern India with a population of 204 million, approved yesterday, February 24, the bill which bans religious conversion by fraudulent means or related to any other improper means including marriage. The Legislative Assembly of Uttar Pradesh approved "The 2021 Religious Conversion Prohibition Bill" which will replace the ordinance promulgated in November 2020. Violations include imprisonment of up to 10 years and a fine of up to 50,000 rupees for offenders.
The bill establishes that no person converts directly or indirectly from one religion to another through the use or practice of misrepresentation, by force, undue influence, coercion, incitement or persuasion or by any fraudulent means, or by marriage. According to the text, a marriage will be declared “null and void” if the religious conversion is carried out exclusively for that purpose, while those who wish to change their religion after marriage should contact the district judge.
The burden of proof concerning the failure to use force or fraudulent means to obtain the conversion will fall on the person accused of the act and on the person converted. A victim of an illegal conversion, or the victim’s parents or relatives can file a first complaint to the police reporting a case and requesting an investigation. Prime Minister of Uttar Pradesh Yogi Adityanath, a member of the Bharatiya Janata Party (BJP), the Hindu nationalist party that rules the state, has said that the legislation was intended to thwart alleged attempts to convert Hindu women to Islam under form of marriage, which Hindu radicals call the "jihad of love". Recently, Madhya Pradesh, a state in central India, ruled by the BJP, has also enacted an anti-conversion law to control religious conversion through inter-religious marriages.
In the past, Odisha, Arunachal Pradesh, Tamil Nadu, Gujarat, Rajasthan, Chhatisgarh, Jharkhand, Himachal Pradesh, and Uttrakhand introduced similar special laws to prohibit conversions by force, fraud, or marriage.
Human rights organizations, church leaders and other civil society activists have expressed deep concern about the growing number of states that are opting for anti-conversion laws in India, which are often exploited and abused to penalize religious minorities or missionaries.
Auxiliary Bishop Joseph Pamplany, a member of the Commission for Doctrine of the Indian Conference of Catholic Bishops, said that "such laws go against the spirit of the Indian Constitution, which guarantees citizens to profess, proclaim and preach freely any religion of his own choice, according to conscience".
According to Bishop Pamplany, the laws against conversion "under the pretext of controlling conversion by flattery or force, are aimed at religious minorities, especially Christians and Muslims".
Shibu Thomas, a Christian activist committed to documenting cases of violence against Christians in India, has told Fides that "all Indian states should repeal their anti-conversion laws that violate the constitutional right of people to choose their religion".
The 2011 Indian census showed that out of the Indian population of 1.3 billion, Hindus are 966 million (approximately 80%), while Muslims are 172 million (approximately 14%) and Christians are 29 million (approximately 2.3% of the population). (SD-PA) (Agenzia Fides, 25/2/2021)

ASIA/ARAB EMIRATES - Dialogue between East and West in music, to "connect souls"

AMERICA/HONDURAS - The Bishops: "May the elected authorities working for the common good project Honduras towards a prosperous future and integral well-being for all"