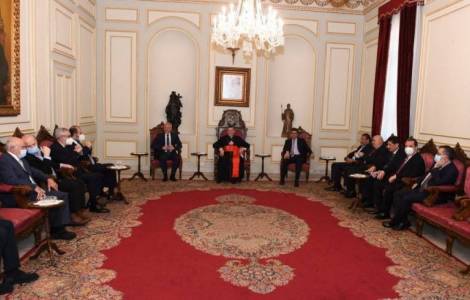 2021-02-13
Maronite Patriarch: "May the Lord end the pandemic with the power of his resurrection"

Beirut (Agenzia Fides) - The Lebanese political forces are beginning to manifest different and sometimes conflicting interpretations and positions in the face of the proposal - formulated in recent weeks by the Maronite Patriarch, Cardinal Béchara Boutros Raï for a UN Lebanon conference to overcome the institutional, social and political crisis in Lebanon and to implement the principle of "Lebanese neutrality" with regard to global and regional conflicts.
On 7 February, Patriarch Raï had expressed for the first time the desire to convene an international conference, which should be responsible for the consolidation of the institutional and political foundations of the nation. A few days later, on February 16, the leader of the Shiite Hezbollah party, Hassan Nasrallah, without explicitly mentioning the Patriarch, declared that any attempt to internationalize the crisis in Lebanon would be a "declaration of war", lending itself to becoming a tool for external interference and also military intervention authorized by the UN in Lebanese internal affairs, with the risk of rekindling the same conflictual dynamics that in the past had triggered the civil war. In his speech, Nasrallah explicitly referred to Chapter VII of the United Nations Charter, which lays down the conditions under which the United Nations Security Council can take coercive and military measures "in order to maintain or restore international peace and security".
On Wednesday, 24 February, representatives of the Lebanese Forces (led by Christian politician Samir Geagea) and the Progressive Socialist Party (led by Druze politician Walid Jumblatt) went to the patriarchal headquarters in Bkerké on Wednesday (see photo) to express support for the patriarchal proposal. Today, Thursday 25 February, representatives of the Free Patriotic Current (CPL), the party founded by the current President of Lebanon, former Maronite general Michel Aoun, and currently allied with Hezbollah, were also received by the Patriarch. The delegation reiterated that it did not reject the proposal, adding that this proposal would, however, have to be the subject of an "internal consensus" before it can be submitted to the United Nations.
On Tuesday, February 24th, Archbishop Joseph Spiteri, Apostolic Nuncio to Lebanon, received a delegation from the Free Patriotic Current to present a memorandum to the Vatican representative on the role of Lebanese Christians in the pluralistic context of the country and the Middle East. In the meantime, former Labor Minister Sejaan Azzi in the context of statements taken up by the Lebanese press, clarified that the process desired by the Patriarch with regard to the convening of an International Conference can only be achieved through patience and that the long-term objective of the Patriarch of Antioch of the Maronites is "a conference similar to that which led to the neutrality of Austria and the Switzerland".
Lebanese analysts believe that only an internal explanation of the terms and contents of the proposals of the Patriarch of Antioch of the Maronites with regard to both Lebanese neutrality and the International Conference can lead to a recomposition of the political framework, avoiding that these proposals are not the object of tactical choices on the part of the coalitions and geopolitical forces present.
The Cardinal's proposals do not intend to launch a process of national refoundation, but rather to consolidate the bases of the current Lebanese national pact based on the Taeff agreements which put an end to the civil war. This includes Lebanon's neutrality with regard to global and regional axes of power, the equal participation of Christians and Muslims in political and institutional offices, the inclusion of sectarian militias in the national army and the implementation of the country's political and administrative decentralization program. (GV) (Agenzia Fides, 25/2/2021)