ASIA/THAILAND - Missionaries and small Catholic communities in the village of Papae, a bath of humanity and spirituality 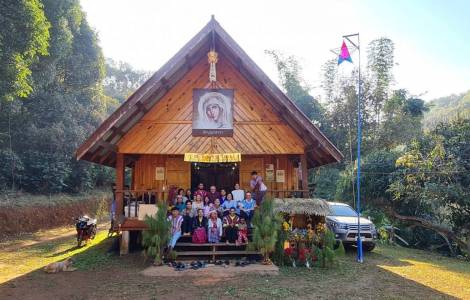 2021-03-01
10th Anniversary of the presence of the Xaverian missionaries at the service of the poor and the last, "by witnessing the Gospel of Jesus"

2021-02-25
Missionaries and small Catholic communities in the village of Papae, a bath of humanity and spirituality

Lamphun (Agenzia Fides) - "The Catholics in this area are only a few dozen - writes to Agenzia Fides Father Ferdinando Pistore, one of the Fidei donum priests of Trivénétie who serve in a territory coinciding with the whole of the province of Lamphun. In addition to celebrating Mass in the parish church of Saint Francis of Assisi, in the city, we try to go up every Sunday and at important times to the village of Papae, located at 1,200 meters above sea level, where a small community of Catholics and where a small chapel dedicated to St. Clare of Assisi was also built".
The presence of the Catholic faith in the north of Thailand is very recent and only dates back to the end of the Second World War. It is almost entirely linked to the Pakagno ethnic group, belonging to the Karen group.
"For us, going up to Papae, also helped by a certain number of nuns of the same ethnic group present in the parish, has always been a bath of humanity and spirituality - underlines the missionary. The simplicity and essentiality of authentic life and the warmth of the welcome never leave you indifferent. Usually we celebrate in Thai language, but those present respond in Pakagno language. Their songs are also characteristic, and convey a profound spirituality".
The inhabitants of this village are part of this ethnic group, characterized by a peaceful, supportive and welcoming culture. They have their own language, different from Thai, and deep-rooted traditions that characterize them and give them a sense of identity which is also expressed through particular rituals linked above all to the salient moments of birth, marriage and death. Historically animists, they maintain traces of a matriarchal structure which leads young married couples to live the first year of marriage within the bride's family, and then build their own house next to that of the bride's parents.
"For the Pakagno people the bond with nature is strong, and in particular in Papae the inhabitants express a sense of pride in taking care of the forest and the trees, showing great attention to extinguishing fires which, unfortunately, are lit very frequently in northern Thailand to burn stubble during the rainless season. This means that the air in the north is often unbreathable, but not in Papae, where care for the environment has led some young people to receive national recognition even in recent days".
"The example of life and faith of a young married couple from Papae - says Fr. Pistore with emotion - is the experience which, has so far marked most of our visits to the village. The husband had been diagnosed with ALS (Amniotrophic Lateral Sclerosis), a very serious and devastating pathology everywhere, but particularly problematic in an isolated village deprived of services like Papae. We missionaries were struck by the dignity and acceptance of the illness, in the spirit of faith on the part of the young husband and by the dedication and tenderness of his wife as well as by the solidarity of the whole village. There was support and commitment from the entire community and a network of friendships that eventually extended to Bangkok and the Camillian Hospital, from where, thanks to Father Renato Attrezzi, the medication the man needed was delivered. Unfortunately, he died a few months ago, but his presence continues to be significant for all of us".
The missionaries of the Congregation of the Sacred Heart of Jesus of Betharram, who had been expelled from China, sought refuge in this area in northern Thailand in 1950, where they were warmly received and found fertile ground for the proclamation of the gospel among the Pakagno people. "Currently - concluded Fr. Ferdinando - almost all priests in the Chiangmai diocese come from this ethnic group. The exchange of Fidei Donum missionaries not only gave us Italian priests from the Triveneto region the opportunity to come to Thailand to work in some parishes, but also gave some diocesan priests from Chiangmai the opportunity to come to Italy to study in our theological faculties. Some have already returned to Thailand after having obtained Licentiates in philosophy, canon law, pastoral theology, and soon also in liturgy".
(FP/AP) (Agenzia Fides, 25/2/2021)