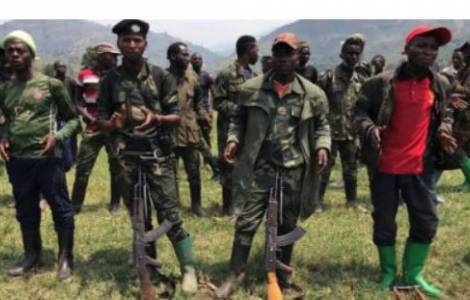 Uvira (Agenzia Fides) - "What happened on February 22 in Goma, with the assassination of the Italian ambassador Luca Attanasio and the policeman who accompanied him, only confirms what we have been saying for some time: total insecurity reigns here. If it is possible to kill a diplomat of this rank in this manner, think about what can happen to ordinary villagers. It seems that the attackers spoke Kinyarwanda (a language used mostly by Rwandans, ed). When we denounce it, we are called xenophobes, extremists. In the meantime, where were the UN blue helmets (MONUSCO) and the Congolese army (FARDC)? The ambassador was a friend I had met thanks to the Xaverian fathers. He loved the Congo and the Congolese very much. He was in North Kivu on a humanitarian mission. He was a man of peace and great friendship. May his soul rest in peace". It is a heartfelt cry launched to Agenzia Fides by Mgr. Sébastien-Joseph Muyengo, Bishop of Uvira (South Kivu), who denounces a tragedy in the context of the endless tragedy of his battered country.
The atrocities committed by the armed groups present in the eastern part of the Democratic Republic of the Congo (DRC) continue unabated. The Ebola virus first, the Covid-19 pandemic then do not seem to have had a dissuasive effect on the more than 150 militias who have been raging for years in this tormented area of Africa, on the border between the DRC, Rwanda, Burundi and Uganda, which in 2020 alone caused a total of 2,000 deaths among the civilian populations - 1,240 in Ituri, 590 in North Kivu and 261 in South Kivu - as well as some 90,000 displaced persons. It was in this context that the three murders took place, which claimed so many young lives.
The Bishop continues: "I am going to Butembo to visit our interdiocesan seminaries there. The situation, after the visit of the Bishops of ACEAC (Assembly of the Episcopal Conferences of Central Africa), who met many interlocutors including the leaders of the armed militias, the leaders of the army, political and administrative leaders, had experienced some glimmers of hope. However, what happened is terrible. Behind all these wars in Ituri, North and South Kivu, on the high plateaus of Uvira, Fizi and Mwenga, is in reality the attempt to grab land that has always belonged to indigenous populations on the part of foreign groups from Uganda, Rwanda and Burundi. The latter kill people in the villages to force them to flee elsewhere and then occupy their land".
The Congo, which has infinite natural and mineral resources, could prosper on the basis of its productions but, for centuries, its wealth has been the cause of conflicts. "The search for natural resources (minerals, timber, etc.) - notes Msgr. Muyengo - creates strong instability. These are resources coveted by neighboring countries as well as by multinationals, which have no interest in seeing these regions stabilized. There is also the specter of balkanization. Some Western powers, as well as African powers, wish to use all these conflicts to foster chaos and divide the country, a bit like what happened at the time of independence (June 1960, ed) with the secession of some provinces such as Katanga, Kasai, Kivu".
"Within the diocese of Butembo-Beni - concludes the Bishop - priests, parish priests, religious have often been kidnapped, others have been killed. And there are also attacks against churches and convents in order to steal vehicles, motorcycles, food, money. The Church, however, has no other means than the Gospel, the call to reconciliation and to peace. Here, in South Kivu, on every occasion offered to us by the liturgical or pastoral calendar - World Day of Peace (January 1), Week of Prayer for Christian Unity (January 18-25), Diocesan Day Youth, summer camps - we make everyone aware of the importance of peace. Sometimes we meet with armed groups and we try to open a channel of dialogue. We often organize fundraising, clothes, medicines and livelihoods to help displaced populations, but the problem is also the poverty of our faithful. We do our best in the formation of consciences, in charity, in prayer". (LA) (Agenzia Fides, 25/2/2021)