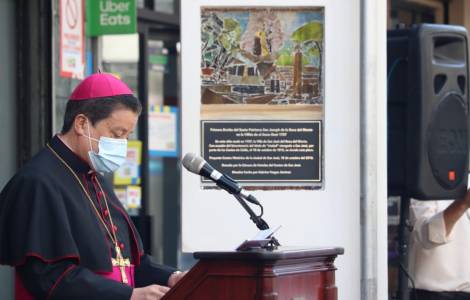 2021-02-23
"Looking to history while thanking God, looking to the future confident in his power": one hundred years of the Ecclesiastical Province

San José (Agenzia Fides) - "It is clear that the Catholic faith of our people has been a fundamental factor in building the identity that defines us in the world, as a nation that fights for peace, democracy, social justice, environment and respect for human rights": said the mayor of San José, Johnny Araya, in a ceremony held at the site of the first hermitage of San José, as part of a rich program of events linked to the centenary celebration of the creation of the first Ecclesiastical Province of the Church in Costa Rica.
"This year will be the time to renew, as a Church, our commitment to walk with the history of our people, in order to help us all to walk on the true path that is Christ", said Bishop Javier Román Arias, Bishop of Limón, in his homily on the occasion of the opening of the celebrations for the Centenary of the Ecclesiastical Province of Costa Rica, on February 13 in the Cathedral of Limón.
Mgr. Román Arias stressed that "looking at history while thanking God" should also encourage us to "look to the future, confident in his power and mercy. Taking a journey through the hundred years since the creation of the Ecclesiastical Province, the Bishop highlighted the certainty "that the Gospel of which the Church is the bearer has not ceased to possess the light and strength necessary to continue to make visible, in word and in deed, the saving work that Jesus came to accomplish".
The Bull of Pope Benedict XV, signed on February 16, 1921, erected the Ecclesiastical Province of Costa Rica, with the Archdiocese of San José, which already existed as a diocese since 1850 and included all of Costa Rica, and the creation of the diocese of Alajuela and the Apostolic Vicariate of Limón. The history of the Church in Costa Rica later continued with the creation of new dioceses and parishes to this day.
Following the demographic growth that Costa Rica experienced during the first twenty years of the twentieth century and the creation in that same period of other Ecclesiastical Provinces in El Salvador, Nicaragua, Honduras and Panama, Central America recovered, during this period, the evangelizing force that the first missionaries had left to continue the mission in South America. (CE) (Agenzia Fides, 23/2/2021)

AMERICA/CANADA - Quebec's Foreign Missions: 100 years at the service of the Gospel