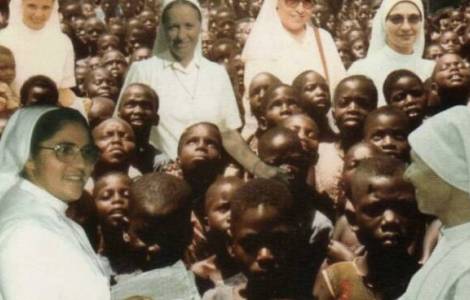 Vatican City (Agenzia Fides) - On February 20, the Holy Father Francis authorized the Congregation for the Causes of Saints to promulgate a number of decrees, including those concerning the recognition of the heroic virtues of three Italian missionary nuns belonging to the Congregation of the "Sisters of the Poor", Palazzolo Institute, who died in the Democratic Republic of Congo (then Zaire) in 1995, following the Ebola virus epidemic. The nuns, who had spent several decades on mission in Africa, engaged in health care assistance, died so as not to leave without care those who had been infected. In Kikwit, Ebola claimed 220 victims, 176 of whom died from the disease.
The three nuns recognized as Venerable are Sister Floralba Rondi, born on 10 December 1924 in Pedrengo and died in Mosango (Democratic Republic of Congo) on 25 April, 1995. She was the head nurse, a missionary in Africa for 43 years. Sister Clarangela Ghilardi, born on 21 April 1931 in Trescore Balneario and died in Kikwit (Democratic Republic of Congo) on 6 May 1995. She was a midwife nurse in Africa for 36 years. Sister Dinarosa Belleri, born on 11 November 1936 in Cailina di Villa Carcina (Brescia) and died in Kikwit (Democratic Republic of Congo) on 14 May, 1995. She was a nurse and missionary in Africa for 30 years.
The epidemic had started in what was then Zaire and precisely in Kikwit, 400 km from the capital, Kinshasa, in the region of Bandudu, wrote Agenzia Fides in giving the news (Agenzia Fides, 20 May, 1995). "The epidemic was caused by the Ebola virus, which takes its name from the Zaire river, where an epidemic of fever and hemorrhagic dysentery first occurred in 1975. The virus manifested itself with more violence in the city of Kikwit, washed by the river in question. Secondly, victims were also found in two other centers: Mosango and Yassa Bonga, which are located halfway between Kikwit and the capital. Although if it is practically impossible to manage to quantify exactly the number of the infected and the victims, it was pointed out by WHO that two thirds of the victims were part of the hospital staff on duty in the three cities. So far there is no effective cure for cases of severe contagion".
These days, the World Health Organization (WHO) has alerted six African countries of possible Ebola infections. The alarm was raised after new cases were reported in Guinea and the Democratic Republic of the Congo (see Fides, 16/2/2021).
In Kikwit, which represented the epicenter of the 1995 epidemic, the nuns worked at the hospital which, at the time, had 11 pavilions for a total of 400 beds, knowing that, during periods of emergency, patients easily reached 1,000. The deceased nuns also visited the sick people in the countryside in that, within a radius of 200 km around Kikwit, there were other small hospitals, dispensaries, infirmaries, leper hospitals and tuberculosis units. In these places of suffering and misery, the only presence was guaranteed by the nuns. The Sisters of the Poor have been in the Democratic Republic of Congo since 1952 and are close to the poorest, lepers, orphans, isolated elderly people.
In the correspondence between the nuns and the Superior, concerned for their health, there are two fixed thoughts: "we remain in our place at the cost of our lives, because these people, these sick people are in a situation of appalling underdevelopment and they need everything". In fact, the nuns could have saved themselves by abandoning Kikwit, but instead they preferred to stay in their place, aware that with their departure many of the sick would have been deprived of care.
"The death of the nuns, martyrs of charity - wrote the then Superior General of the Poor Sisters, Sister Gesualda Paltenghi - made us deeply meditate in order to understand, collect and guard the secret of their testimony. Their death was the conclusion of a life given day after day with love, joy, humility and total availability to God and to their brothers. This is the true 'prophecy'! We are certain that the life given with love and out of love by our Sisters to Kikwit is the seed which generates life for the Church in Zaire, for Africa, for the whole Church and also for our Congregation"
Together with the three nuns whose heroic virtues have been recognized, Sister Danielangela Sorti, Sister Annelvira Ossoli and Sister Vitarosa Zorza also died in the same circumstances. The Cause of Beatification was launched for all six, opened in the Cathedral of Kikwit on April 28, 2013. On June 8, 2013, the respective Investigations followed in the Diocese of Bergamo, where the nuns had lived part of their lives, which ended on January 25, 2014. The diocesan phase closed in Kikwit on February 23, 2014. (SL) (Agenzia Fides, 22/2/2021)

AFRICA/EGYPT - The Library in Alexandria offers online lessons on St. Corona, to be invoked during pandemics

AFRICA/DR CONGO - The White Fathers: with the arrival of Covid-19, risks of epidemic and famine