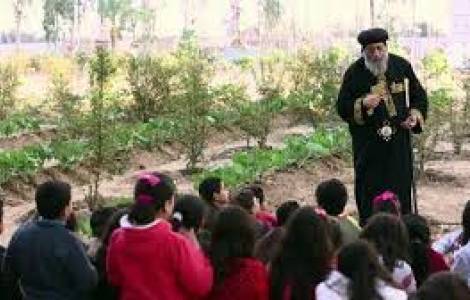 Cairo (Agenzia Fides) - In Egypt too, the Covid-19 pandemic makes it impossible to participate in person in important gatherings and pushes many families to spend more time together at their homes. This de facto situation prompted the Coptic Orthodox Patriarch, Tawadros II, to adapt to current circumstances the traditional weekly public catechesis on Wednesday evening, usually held in the Coptic Orthodox Cathedral in Cairo. For a few weeks now, not being possible to open the doors of the cathedral to crowds, the patriarchal catecheses have been disseminated on the Internet through the means of communication of the Patriarchate and the Coptic Orthodox Patriarch has decided to dedicate a series to questions and needs related to family life, so that families can follow the meetings also from home, drawing benefit and comfort.
In the catechesis broadcast on Wednesday 17 February, Pope Tawadros focused on suggestions and criteria to be treasured in the education of children. In particular, the Patriarch advised to do everything possible to free children from the siege of false needs imposed on them by the current consumerist globalization. Children and young people - suggested Tawadros II - must be helped to "eliminate things that are not useful", to reduce "the consumption of unnecessary things", to enjoy the gifts of creation and of family love, to recognize "the value of time" and patient work, helping them to free themselves from the frenzy and dictatorship of "everything at once" which also uses the speed of communication guaranteed by new digital technologies as a tool. Pope Tawadros also invited to transmit by example to boys and girls respect for the environment and sobriety in the use of natural resources, starting with water.
Already in July 2015, as reported by Agenzia Fides (see Fides, 7/7/2015), Patriarch Tawadros II, during his pastoral visit to Alexandria in Egypt, wanted to attend a meeting of reflection and prayer with more than twenty wives of Coptic Orthodox priests working in the eastern sector of the Egyptian metropolis. According to what sources close to the Coptic Orthodox Church indicate, Tawadros II proposed a meditation uniting considerations on the life and vocation of the priest and reflections on the reality of motherhood and on marriage as defined in the biblical texts. In the Coptic Churches there is the possibility of choosing candidates for the ministerial priesthood both among celibate men and among those who are married, while the Bishops are all chosen from among the monks and are therefore celibate.
In February 2016 (see Fides, 4/2/2016), during a catechesis meeting held in the Cairo suburb of Guizeh, Patriarch Tawadros focused on domestic violence, of which women and children are victims, describing this phenomenon as a social plague that has serious effects on people's lives as well as on civil coexistence. On this occasion, citing the words of Jesus in the Speech from the Mountain ("Blessed are the humble, for they will inherit the earth"), Pope Tawadros stressed that even marital and family problems "must be solved with gentleness", following the evangelical teaching of humility, an essential characteristic of the way of life of those who follow Jesus. (GV) (Agenzia Fides, 18/2/2021)

ASIA/MYANMAR - The nuns accompany and comfort the young demonstrators

AMERICA/BOLIVIA - One year after "Querida Amazonia", the appeal to dream of an Amazon where the rights of the poorest are still valid