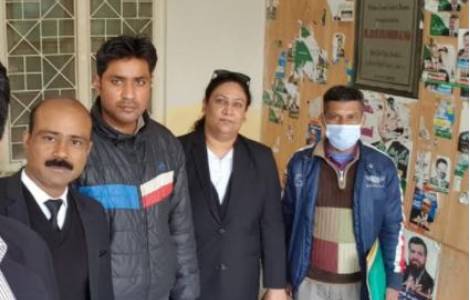 2021-12-23
Christian girl, kidnapped and converted, reunites with her family

2021-12-22
The President of Pakistan: a law will be made against forced conversions

Lahore (Agenzia Fides) - Two young Christians have been charged for blasphemy, accused of having preached Christianity to young Muslims and of having publicly dishonored Islam, the Koran and the Prophet Mohammed at Model Town Park in Lahore. They are Haroon Ayub Masih, 25, and Salamat Mansha Masih, 30, both members of an evangelical community. The arrest of one of the two defendants - the second who fled - took place immediately after Haroon Ahmad, a Muslim, filed a complaint at Model Town police station against the two youths on February 13, challenging the violation of the blasphemy laws enshrined in article 295 a, b, and c of the Pakistani Penal Code.
According to the complainant, Haroon Ayub Masih and Salamat Mansha Masih approached a group of Muslims, starting to preach Christianity and handing them a book in the Urdu language entitled "Zindagi ka Paani" (literally Water of Life). Haroon Ahmad in the First Information Report says: "The two men began to commit blasphemy by dishonoring the Prophet Muhammad, saying that he was a vagabond, who got married to raise his generation while Jesus did not marry and proclaimed the truth".
The report, sent to Fides, adds: "They said that the Torah and the Gospels are true books and that the Holy Quran does not tell the truth. They continued to dishonor Islam, hurting our religious emotions and feelings openly and publicly". The author of the complaint further states: "Christians have committed blasphemy by dishonoring the Prophet Muhammad, the Holy Quran and Islam. I ask you to punish the two men and the publishing house under the blasphemy laws for having published and printed these texts".
The police have launched a procedure based on the blasphemy laws and in particular Article 295 a / of the Pakistani Penal Code which punishes "deliberate or malicious acts aimed at offending the religious feelings of any person, insulting religion and religious beliefs", with a sentence of up to 10 years imprisonment or through a fine. Then cited is article 295 b /, relating to "desecration of the Holy Koran", which provides for life imprisonment, knowing that charges based on article 295 c / are also formulated for having "used derogatory remarks, pronounced, written directly or indirectly that offend the name of the Prophet Mohammed or other prophets", article which provides for the mandatory death penalty.
One of the two Christians, Salamat Mansha Masih, was arrested by the police when Haroon Ayub Masih managed to escape and his family also went into hiding.
Christian lawyer Aneeqa Maria Anthony, head of the NGO "The Voice", which provides legal defense for Haroon Ayub Masih, explains to Agenzia Fides what happened, referring to what Haroon Masih said: "We on our own were studying and discussing the New Testament when some young people passing by stopped to hear what we were saying. After hearing that we were talking about the Bible, they asked for information and then we gave them a little book called 'Water of Life' with some excerpts from the New Testament. There is nothing blasphemous in this book. One of them asked us to stop reading and talking about the Bible in an open place, as this would not be allowed. We were shocked to hear this, because we had not invite them to listen to us. We told them not to interfere as long as we were just talking to each other, as our rights as citizens allow us to do. At that point the confrontation became a heated discussion and we preferred to abandon the scene".
The lawyer continues: "Some of the young Muslims, however, took Salamat and took him to the park's security officer, treacherously accusing the two of preaching Christianity and of having used blasphemous words against Islam, but this is completely false. So they took him to the police and the complaint was filed". Haroon Masih said: "I read the Bible with my brothers, we serve God in different places in Pakistan. I have never spoken against any religion. I respect the Prophet Mohammed".
Lawyer Anthony reports another delicate aspect: the complaint is registered and signed by Haroon Ahmad who was not present at the scene, he is not an eyewitness of the facts, but is on the other hand a member of the extremist movement "Tehrik-e Labaik", which wanted to take on the responsibility for accusing the two Christians, stating that he "wanted to continue to protect Islam from all evil".
The lawyer informs that the first hearing on the case is scheduled for February 24 and that, in the meantime, he has obtained a provisional bail for Haroon Ayub Masih. And he concludes: "We seek justice for two young innocent Christians. The Tehrik and Labaik group seems to have taken the case very seriously and violently, acting in a threatening manner. We will not be intimidated but we need the support and prayers of many people". (PA-AG) (Agenzia Fides, 17/2/2021)

AFRICA/MALAWI - Increase in the cost of living: for the "Justice and Peace" Commission, it is urgent "to listen to the cry of the people"