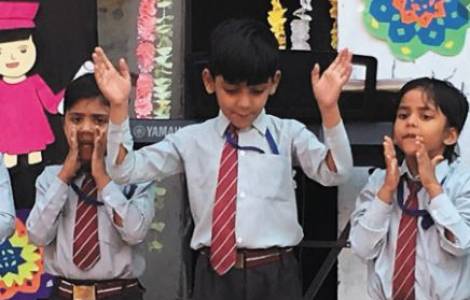 New Delhi (Agenzia Fides) - Within the federal territory of Dadra and Nagar Haveli and Daman and Diu, in western India, in all schools, students of all levels will have the obligation to celebrate Vasant Panchami (Hindu festival which marks the preparation for the arrival of spring), by worshiping the goddess Saraswati (goddess of knowledge). This is what is available in a circular issued by the competent authorities and sent to all schools, which has created unease among teachers and students who are not of Hindu religion as well as within private institutes.
As Fides has learned, the United Christian Forum (UCF), an organization that promotes fundamental and civil rights, has called on the government to withdraw the directive ordering the worship of Hindu deities. "The Christian community of Dadra and Nagar Haveli and Daman and Diu is suffering because of the directive", A. C. Michael, national coordinator of UCF, told Fides.
According to the circular, all governmental and private schools - including Christian ones - must organize the program of the festivity, paying homage to the divinity and then submit a compliance report accompanied by photographs by February 17. The directive includes the recitation of Hindu prayer formulas and Hindu rituals in all schools.
The Christian community sees the current ordinance as "a way of limiting the practice of its own faith and as a violation of its freedom as well as of the right to administer its own institutions" underlines A.C. Michael, Catholic lay leader. The conduct of the administration - he asserts - "seriously undermines the freedom of religion and the freedom to establish and administer educational institutions, prerogatives guaranteed by the Indian Constitution, as a guarantee for all religious minorities".
"The peace-loving Christian community prays that India continues to prosper and that the centuries-old fabric of our pluralistic land remains intact. On behalf of the community, the United Christian Forum asks the administration and the Direction of Education to immediately withdraw this circular", notes Michael.
Two years ago, the same administration had tried to cancel Good Friday as an official holiday: the Christian community had turned to the High Court of Bombay and succede in having the order revoked.
It is pertinent to note that in India, the secular ethos places a constitutional limit on the government in giving preferential treatment to any religion. In the historic ruling "SR Bommai vs Union of India" (1994) the Supreme Court declared that "religious tolerance and equal treatment between all religious groups, the protection of their lives, property and places of worship constitute an essential part of secularism enshrined in the Constitution".
Indian Christians today recall that, during India's struggle for freedom and independence, their contribution is well documented, while even in the post-independence phase they played an important role in nation building, making a valuable contribution to the armed forces, railways, health care and school and university education. (SD-PA) (Agenzia Fides, 16/2/2021)