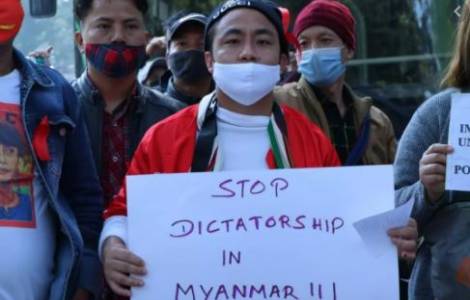 Yangon (Agenzia Fides) - "Our appeal is to stop the illegal arrests of citizens made during the night. We will continue to nurture the Civil Disobedience Movement that thousands of people of good will, of all cultures, social classes, ethnic groups, religions are pushing forward across the country. We want to express our peaceful but firm dissent towards the military government. We want to be inspired by Gandhi and the non-violence of the Gospel". This is what Joseph Kung Za Hmung, Burmese Catholic layman and Director of the Burmese Catholic newspaper Gloria News Journal, told Agenzia Fides about the social situation in Myanmar in the aftermath of the military coup that subverted the results of the November democratic elections on 1 February.
Jospeh Kung tells Fides: "The Civil Disobedience Movement is growing stronger day by day and currently involves personnel from all ministries, even if the military are asking them to return to work for the proper administration of the country. Many have refused to return to work in their ministries, both at the federal government level, and in offices at the regional level, within the country".
On the tenth day of civil disobedience, Myanmar is still crisscrossed by street demonstrations calling for the release of Aung San Suu Kyi and President Win Myint, arrested in the aftermath of the coup that saw Tatmadaw (the Burmese national army) resume the power it left in 2015 in the hands of the first Burmese civil government.
Despite the fears that spread over the weekend, the day saw a continuous head-to-head between the police and demonstrators but not the hardening of the attitude of the police expected due to the deployment of armored vehicles and the presence of equivocal characters in the most important areas of towns. There were fears of the repetition of the provocations made in 1988 by groups of criminals, which had provided the army with a pretext to bloody suppress student protests against the military dictatorship. Groups of citizens therefore organized themselves autonomously, instituting surveillance patrols and rounds which isolated these characters, many of whom could have been recruited from among the 23,000 inmates released by the junta in recent days to empty the prisons - where there are now some 400 political dissidents - and perhaps to use some of them as agents provocateurs.
The new government, which has taken the name of "State Administrative Council", has meanwhile suspended the law the protection of privacy, thus legitimizing arrests and searches carried out without a warrant, while a new law on cyber-security is being prepared with the task of managing social networks and the spread of the Internet on a new legal basis. These are activities that the country cannot do without (now the economic and bureaucratic activities largely depend on the web) but which can be managed through protection software and systems to control telematic activity.
On the International level, in the meantime, pressure has increased on the eve of Aung San Suu Kyi’s court hearing in Naypyidaw (it is not clear whether in person or via the web) which, scheduled for today, was postponed for no reason to the day after tomorrow. It is not known whether the President will also be questioned. The two leaders are accused of violating import laws and anti Covid restrictions. While the United States has already launched economic sanctions and a dozen embassies have published yet another communiqué condemning possible new violence, UN Secretary General António Guterres yesterday called on Myanmar's military and police to ensure that the right of peaceful assembly is "fully respected" and that protesters "are not subject to reprisals". Three days ago, UN Deputy High Commissioner for Human Rights Nada al-Nashif noted that a lack of action on violations committed by the military Burmese, "encouraged" them by contributing to the current crisis and that the indiscriminate use of weapons against peaceful demonstrators - he added - is "unacceptable" since "more violence against the people of Myanmar will only aggravate the illegality of the coup and the guilt of its leaders". (MG-PA) (Agenzia Fides, 15/2/2021)

ASIA/VIETNAM - Faith in Christ during military service, with the help of new technologies

ASIA/MYANMAR - "The military say 'peace' but brutality and violence increase"