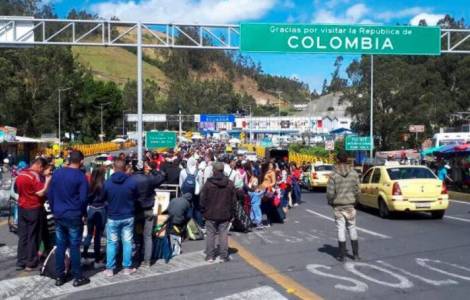 Bogota (Agenzia Fides) - "I always look with gratitude on the dedication of those who collaborate in favor of migrants. - said the Holy Father after yesterday's Angelus, Sunday 14 February -. I thank all of you for what you do for migrants. Today in particular, I join the Bishops of Columbia in expressing gratitude to the Colombian authorities for implementing the temporary protection statute for Venezuelan migrants present in that country, fostering welcoming, protecting and integrating. It is not a super wealthy, developed country that is doing this… No: this is being done by a country that has many problems of development, of poverty and of peace… Almost 70 years of guerrilla war. But with this problem they have had the courage to look at those migrants and to create this statute. Thank you to Columbia. Thank you!"
After the announcement made by the Colombian National Government on the implementation of the Statute of Temporary Protection for Venezuelan Migrants (ETPV), the Episcopal Conference of Colombia and the National Secretariat of Social Pastoral Care - Caritas Colombia, acknowledged in a statement sent to Fides, that it is "a valuable response aimed at promoting the reception, protection, promotion and integration of the migrant population".
"The Statute of Temporary Protection for Venezuelan Migrants aims to favor more than 1.7 million Venezuelan migrants in Colombia - recall the Bishops -. Its implementation will constitute a fraternal act which opens the doors to guarantee that this population who arrive on our territory can enjoy the fundamental rights which are those of all and an access to opportunities of dignified life".
Citing the repeated appeals of Pope Francis to governments around the world in favor of the reception and integration of migrants and refugees, and the commitment of the Social Pastoral Care-Caritas Colombia always guided by the Gospel and the Social Doctrine of the Church, they recall that "historically, the Church of Colombia, its dioceses, its religious congregations, its apostolic groups and movements, with all their pastoral organizations, have effectively contributed to providing a global response to the needs of our brothers and sisters seeking protection in Colombia. The host communities have contributed significantly to this effort through their solidarity and generosity, the national and international community as well as numerous cooperation institutions".
The note, signed by the President, the Vice-President and the Secretary General of the Colombian Episcopal Conference, and by the President of the Episcopal, Social and Charitable Pastoral Commission, concludes by reiterating its commitment: "the Catholic Church in Colombia will continue to offer its support and to launch charitable actions in favor of immigrants and refugees, listening to and including the weakest in social dynamics, promoting a public policy on migration emphasizing fundamental rights, in addition to promoting durable and sustainable solutions for people in need of international protection".
The Church in Venezuela, through the organizations constituting the Red Clamor Network, welcomed the news: "We applaud the courage of the Colombian government that with this provision becomes a world reference point in terms of migratory process and we hope that this example will be followed by the other countries in the region which have welcomed at their borders, like Colombia, a vulnerable population, in need of protection and development opportunities like the thousands of migrant and refugee families from Venezuela" the document reads.
Through the ETPV, the precariousness of temporary permits is put to an end, which ensures stability and greater tranquility for Venezuelan immigrants who will be able to enjoy for a period of 10 years all the human rights guaranteed by the Colombian State to its citizens, such as access to health services, education, employment. Red Clamor stresses that "with this decree there is a change in Colombia's immigration policy, which adopts measures for the Venezuelan population that are durable and with a protective approach". (SL) (Agenzia Fides, 15/2/2021)

AMERICA/VENEZUELA - The Bishops urge vaccinations: "We cannot wait any longer, the human being is above political diatribes"