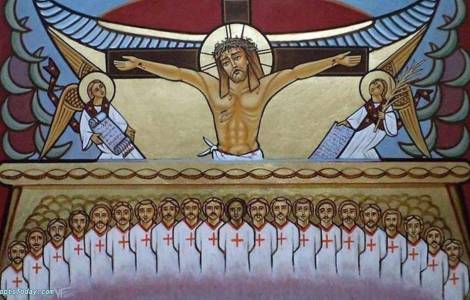 Samalut (Agenzia Fides) - The social distancing measures also planned in Egypt to fight against the Covid-19 pandemic did not prevent celebrating, even if in a sober and limited way, the 6th anniversary of the massacre of 20 Copts in Libya in the company of their Ghanaian workmates from jihadist terrorists linked to the so-called "Islamic State" in February 2015.
On the evening of Sunday 14 February, in the village of al-Awarm in Minya province, a vigil took place in the shrine dedicated to the Martyrs of the Faith and of the Fatherland, where their mortal remains are kept. The liturgical commemoration, presided over by Anba Pavnotios, Coptic Archbishop of Samalut, was attended by various priests and a consistent representation of the martyrs' families, among others.
In the past few days, a TV report by the journalist Hamdi Rizk entitled "From Minya via Libya to Paradise" had reconstructed the vicissitudes of Coptic Orthodox martyrs massacred by jihadists . Thanks to interviews with different members of the families of the martyrs, this story of martyrdom emerged in its aspects of a fruitful and consoling experience for the faith of many baptized Egyptians. Last year, the 5th anniversary of the massacre of the Coptic Orthodox martyrs of Libya was solemnly celebrated at al-Awar shrine from February 1 to 16 (see Fides, 7/2/2020) through liturgical celebrations, lectures, guided tours of the museum and prayer meetings. This year, however, large crowds had to be avoided as a result of the pandemic.
The 20 Egyptian Copts and one of their Ghanaian work colleagues were kidnapped in Libya in early January 2015. The video of the beheading was posted on jihadist websites the following February 15. Just one week after the news of the massacre, the Coptic Orthodox Patriarch Tawadros II decided to include the men executed by IS as 21 martyrs in the Coptic Church's book of martyrs and to celebrate their commemoration on February 15.
The remains of the Copts killed by the jihadists in Libya were found and identified in a mass grave on the Libyan coast near the city of Sirte in late September 2017. Their bodies had been found with their hands tied behind their backs, dressed in the same orange suits they wore in the macabre video filmed by the executioners at the time of their beheading. "The video about their execution – said Anba Antonios Aziz Mina, Coptic Catholic Bishop Emeritus of Guizeh after the massacre of the 21 martyrs, was built as a chilling cinematic staging, with the intent of spreading terror. Yet, in this diabolical product of fiction and bloodthirsty horror, we see that some of the martyrs, at the moment of their barbaric execution, repeated 'Lord Jesus Christ'. The name of Jesus was the last word on their lips. Like the first martyrs, they confided in the one who would soon welcome them. And so they celebrated their victory that no executioner can take away from them. That name, whispered at the last moment, was like the seal of their martyrdom" . (GV) (Agenzia Fides, 15/2/2021)

AFRICA/NIGERIA - Another priest kidnapped; alarm after the attack on a prison near Abuja