AFRICA/CONGO - The Bishops: "Serious reservations on the regularity of the March 21 vote" 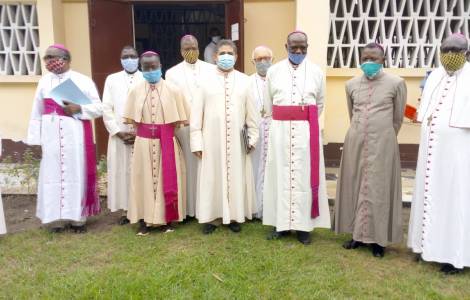 Brazzaville (Agenzia Fides) - "Of course, the elections are scheduled for March 21, however we have serious reservations about the possibility of organizing peaceful, participatory, transparent, free and credible presidential elections under the current conditions", said the Bishops' Conference of Congo in a statement read to the press by its spokesman, His Exc. Mgr. Victor Abagna Mossa, Bishop of Owando.
The reservations expressed by the Bishops of Congo-Brazzaville relate to the situation created with the Covid-19 pandemic and the related social distancing measures. "How, in fact, will we be able to hold all the social distancing measures and mass gatherings that a free election campaign requires? The electoral law provides for the counting of the ballot boxes to be public. How do we intend to apply this transparency measure, in particular with a curfew at 8 pm?", ask the Bishops.
Since March 2020, the cities of Brazzaville and Pointe-Noire, which alone represent about half of the country's population, have been living with a curfew imposed by measures to combat the coronavirus which has so far caused the death of 120 people according to official data.
The Bishops underline that the elections in Congo have often provoked violence, alluding to the constitutional referendum of 2015 and the presidential elections of 2016 marked by strong controversy.
For the first time in the history of Congo, the police officers and the military will vote on March 17, before the rest of the population, called to the polls on March 21. "How are we going to get the names of police officers out of the electoral register to put them on a special list, so that they vote before the other Congolese?", asks the Bishops' Conference again, which underlines how "the Congolese have less and less faith in the current electoral system, with uncontrolled electoral lists, which include, among other things, deceased people, and institutions responsible for elections whose independence is yet to be demonstrated".
"Where are the voters lists and the biometric cards to vote?", added Mgr. Victor Abagna Mossa at the press conference.
Presidential candidates have until February 7 to submit their candidacies. Among them is the current President Denis Sassou Nguesso, 77, who guided the country from 1979 to 1992, and from 1997 to date. (L.M.) (Agenzia Fides, 3/2/2021)