ASIA/HOLY LAND - "I come from a land of conflict". Margaret Karram, Palestinian from Galilee, elected President of the Focolare Movement 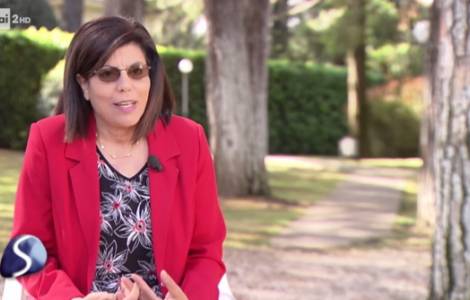 2021-04-10
Patriarch Pizzaballa: the proclamation of the Gospel passes through the gratitude of "forgiven sinners", such as Mary Magdalene

2021-03-25
Patriarch Pizzaballa celebrates the solemnity of the Annunciation in Nazareth: virtual Masses do not save us, but the encounter with Christ

2021-03-17
Christian institutions, third largest employer among the Palestinian population, according to a survey people

Haifa (Agenzia Fides) - "I was born in Haifa, a city in Galilee, and my land has always been under conflicts", said Margaret Karram, 58, Palestinian, who was elected new President of the Focolare Movement last Sunday.
The 359 delegates who attended the General Assembly of the Movement, currently underway in digital form, elected her to succeed Maria Voce on January 31st.
Margaret Karram received the votes of representatives of the Focolare Movement around the world. The appointment was made official on Monday 1 February, after confirmation by the Vatican Dicastery for the Laity, Family and Life, in accordance with the general Statutes of the Focolare.
In a video interview a few years ago that is now being published by the official media channels of the Focolare Movement, Margaret Karram tells how her birth in Galilee, her family origins and life in the Middle East shaped her and her inner expectations and outlook affect the things of the world.
"Our home", Margaret said, "is on Mt Carmel, in a Jewish quarter. We were the only Catholic Christian Arab family orginially from Palestine. I remember when I was small, maybe six years old, some children began to insult me heavily saying that I was Arab and couldn’t stay in that quarter. I ran to my mother in tears, asking the reason why. In response, my mother told me to invite those children over to our house. She had baked some Arab bread and gave it to them to take to their families. From such small gestures we began to make contact with our Jewish neighbours who wanted to know the woman that had performed such a gesture". Arab, Catholic Christian, Margaret is an Israeli who studied the history of Judaism at the Hebrew University of Los Angeles. Many of her family members emigrated to Lebanon during the war years. And she herself personally experienced the moments of loss that are common to those who live and grow up in conflict situations. "Often", Margaret said of herself, "I used to go to the Arab quarters in Jerusalem, Bethlehem or in other Palistinian territories. Arab was spoken – which is my first language – the people could tell from my accent that I came from Galilee which is Israel territory. Likewise, if I spoke in Hebrew they made me notice that my accent was different from theirs. I had a sense of confusion about my identity: I was neither Palistinian nor Israeli… At age 15 I got to know the Focolare Movement, and the spirituality of Chiara Lubich... I felt that I didn’t have to change people, but change me, my heart. I went back to believing that other people were a gift for me and that I could be a gift for them".
Margaret Karram worked for 14 years at the Italian Consulate in Jerusalem, during the period of the Intifada, which was also marked by bloody attacks in public places. "Even on the bus I took every day to work. I was frightened. I carried on because I had a community I could share the Focolare spirituality with. And I finally found my true self as a Christian, Catholic, witness to hope. It was an important step which freed me from the fears and uncertainties. I could love everyone, Arab and Israeli, assisting at small miracles, seeing Jews and Muslims change attitude and start to build peace".
In June 2014, Margaret Karram was part of the Christian delegation present at the prayer of "invocation for peace" with Pope Francis in the Vatican Gardens together with the Ecumenical Patriarch Bartholomew I, the Israeli President Shimon Peres and the Palestinian President Abu Mazen. After this meeting, the war in the Gaza Strip resumed. "I understood" said Margaret, remembering that time "that human hearts can only be changed by God. We should continue to invoke peace from God. Like the olive trees we planted that day, that peace might take root and let us see the fruits". (GV) (Agenzia Fides, 2/2/2021)