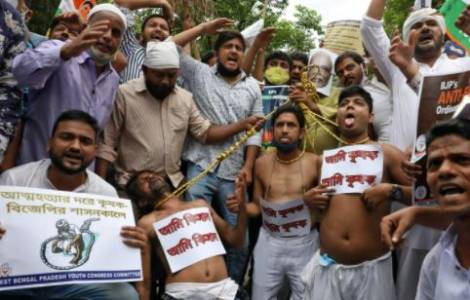 New Delhi (Agenzia Fides) - The All India Catholic Union (AICU), a historic organization of the Catholic laity in India, founded in 1920, expresses its full solidarity with the farmers who, have been protesting since last November, demanding the repeal of the new laws governing the agricultural sector. In a note sent to Agenzia Fides, "AICU reaffirms its closeness to the farmers and workers of the nation", says the national President Lancy D'Cunha.
The AICU is the largest movement of its kind in Asia, with members in all states of India. The members are professionals operating in the service sector and small businesses. Many of them work in the agricultural sector and cultivate rice fields or other grains as owners and employees of farms.
"We are naturally in solidarity with all people of whatever faith they belong to who are farmers, fishermen and factory workers. We know and understand how much work and sweat of the farmer it takes to produce food for the country and harvest crops for export", says D'Cunha. "We know the love that the farmer has for the land, for the animals he raises, for the environment in which he works. This passion is not measured only in economic terms", reads the statement. "Therefore, we are in total solidarity with the farmers who are now protesting at the gates of the national capital, New Delhi. Farmers are fighting to save agriculture and thus save India from disaster", said the president of AICU.
The federal government approved three bills last fall: the first on trade in agricultural products, the second on price insurance agreement and the third on agricultural services, thus completely reforming the agricultural sector. The new laws move away from government-assisted marketing systems and promote contract farming and multinational investment in the agricultural sector. Farmers have expressed their distrust of the new system, which risks exposing them - without state mediation - to the mercy of large international groups. This is why, since November they have been promoting demonstrations to demand the repeal of the laws in question, also promulgated by the federal government in September 2020 without any national consultation or debate, and without going through Parliament.
"We also know that in Europe and in many other countries, governments honor the work of farmers. Governments, therefore, grant huge subsidies to their farmers", AICU spokesperson John Dayal told Fides. According to Dayal, "the situation in India differs from state to state and farmers are very stressed. In the event of a drought, hail or flood, an entire year's work can be lost. We know that in the past ten years, more than 350,000 farmers have committed suicide because they could not repay their loans and the stress had become too great". Dayal concludes: "The government has adopted an inhumane attitude towards the farmers, camped outside the national capital in a cold and rainy climate. We ask that the new laws be repealed immediately". (SD-PA) (Agenzia Fides, 2/2/2021)