AMERICA/PERU - Transparency of investments: guarantee to protect the environment and public funds for the benefit of citizens 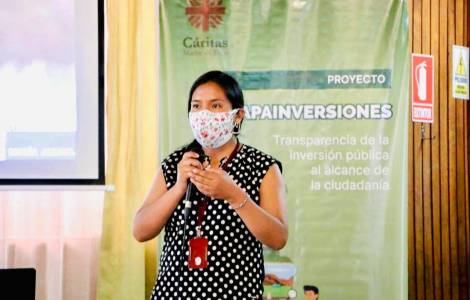 2021-03-27
The Bishops: "Together towards the Risen Christ, light in the night of the pandemic"

2021-03-20
Death of the Bishop Emeritus of Chimbote from Covid-19, known for his continual struggles of the marginalized

Madre de Dios (Agenzia Fides) - These days the methodology seminar is being held in Puerto Maldonado, capital of the department of Madre de Dios, in the southern forest of Peru, on the theme "Geographic map of territorial investments: transparency of public investment for the benefit of the population". It is an instrument aimed at ensuring that civil society and all institutions manage to access information relating to all the projects that are authorized for them to be implemented in their own localities and in the region.
As the very title of the initiative indicates, the primary goal is "transparency of investment in the region", a guarantee to preserve the environment and public funds. This initiative is promoted by the Secretariat of the Presidency of the Council of Ministers, by the Inter-American Development Bank and by Caritas de Madre de Dios.
All the initiatives aimed at investment in the area have not so far taken into consideration the care of Creation and the reality of deforestation of the Peruvian and South American forests. Just a year ago, the BBC published a dossier on the destruction of the Amazon with appalling figures. In addition, according to a report by the Amazon Environmental Institute (IPAM), cited by the BBC dossier reads, the fires in August 2019 were directly related to deforestation.
Despite complaints and promises from the governments of Brazil and Bolivia, the fires were repeated in August 2020, again with the aim of expanding the agricultural borders of these countries. This practice, along with uncontrolled mining, reported the BBC, is used in 9 countries in the South American Amazon. Hence the importance, as Caritas Madre de Dios underlines, of reviewing this entire approach, following the indications also given by Pope Francis during his visit in 2018: "We must love this land, feel it ours, take care of it, listen to it and marvel at it".
Here are the words of the Pope dated January 19, 2018 during his meeting with the peoples of the Amazon: "The native Amazonian peoples have probably never been so threatened on their own lands as they are at present. Amazonia is being disputed on various fronts. On the one hand, there is neo-extractivism and the pressure being exerted by great business interests that want to lay hands on its petroleum, gas, wood, gold and forms of agro-industrial monocultivation. On the other hand, its lands are being threatened by the distortion of certain policies aimed at the “conservation” of nature without taking into account the men and women, specifically you, my Amazonian brothers and sisters, who inhabit it. We know of movements that, under the guise of preserving the forest, hoard great expanses of woodland and negotiate with them, leading to situations of oppression for the native peoples; as a result, they lose access to the land and its natural resources. These problems strangle her peoples and provoke the migration of the young due to the lack of local alternatives. We have to break with the historical paradigm that views Amazonia as an inexhaustible source of supplies for other countries without concern for its inhabitants". (CE) (Agenzia Fides, 1/2/2021)

AMERICA/BRAZIL - A missionary: "The Church accompanies the peoples of the Amazon on their path of joy and authenticity"

AMERICA/BRAZIL - REPAM: alarming increase in the number of infections and deaths due to Covid-19 in the pan-Amazon region